Yesterday I was at my mom's picking up some mail.  "I got my braces tightened today," I said.

"You did?  What, were they coming loose or something?" she asked.

You see, she's 73 years old.  She comes from a generation in which no one had braces, or really even went to the dentist.  So I don't know why I even told her.

Anyway, my orthodontists didn't put a new wire in, but they made a few tweaks that are now a bit painful.  They said my teeth are moving pretty fast, but that my bottom braces won't be on for another 4-6 months, instead of in 2 months as I was originally told.  So that's kind of a bummer.  But I do have some wicked x-rays, or orthopantomographs, are they're called (taken on 5/18/10): 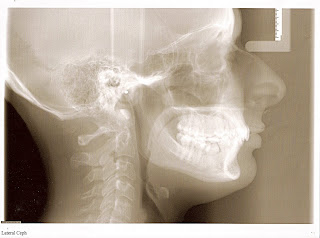 Ha ha, look at that funny, scrawny neck!  Spines are gross.  Anyway, I had always thought of the human skull as this blocky, clunky thing, but it's actually pretty delicate-looking.  It cracks me up to look in the mirror and think that there's a grinning skull under there; I had never really thought about it until I saw this.  I wonder if some forensic expert could accurately reconstruct my face with clay using the shape of my skull.  Like, would they know to make the nose really huge, with a bulbous tip and large nostrils?  How much can they tell about the softer tissues?  Would they know that I have googly eyes and a little bit of a jowl?  I know scientists can tell a LOT about a person's life by their bones, and I wonder how much they'd be able to tell from mine, if I were ever found decomposed and they had no picture or prior knowledge of me. 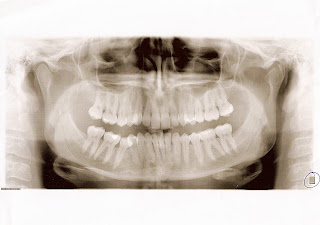 As for this second picture, I was kind of surprised that there's no obvious evidence that my wisdom teeth ever existed.  I got them out almost five years ago, and I kind of expected there'd be thick calcium deposits or something in their old sockets.  Nope.  Just smooth bone, at least to my untrained eye.  And look at all those fillings.  Seven of those suckers.  Did you know that when you're a kid and your permanent teeth are coming in, they absorb the roots of your baby teeth?  I had always wondered why baby teeth are bowl-shaped when they fall out.  One of the many nice things about being an adult is not having the annoyance of mixed dentition (isn't that a great word, by the way??  Dentition...).

So, back to talking about braces, here's a comparison... 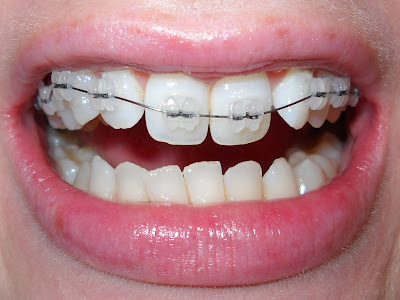 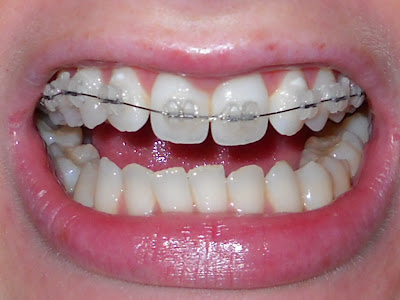