A generally unpleasant trip, with a few exceptions

Last week I went with 10 other McNair scholars on a field trip to Washington, DC.

A month or two before, I had been excited about the trip, thinking it would be the highlight of my summer, but it really couldn't have come at a worse time.  It was also E X H A U S T I N G.  When I got back I felt like I had been physically beat up and mentally abused.  Excluding travel time, I was only there for three days, and in that time I went to, or rather ran through the:

I've traveled a lot on my own, but only once like this, where I was settled in one place, then disrupted my routine by packing a suitcase to go look at monuments and museums somewhere else, then came back and unpacked and scrambled to catch up on emails and laundry and work messages and...blech.  My preferred method is to move somewhere, get a job and a place to live, then see the touristy sites one by one on my days off.  My way is much more easy and gradual and relaxing.

I've decided I don't like the first way, the disruptive way.  Mary, one of the trip's chaperones, crammed all this sightseeing into three days, and we were all so tired and hot and clawing for fresh air and some alone time.  Our wake-up calls were at 6:30 every morning and our days were packed with activites until 10pm every night.  Nobody could stop complaining about the overly-ambitious itinerary, the lack or rest, the difficulty in keeping a party of 12 together in a bustling inner city, and the unfounded restrictions on alcohol.  Before we left, we had to sign an agreement that if we even took one sip of alcohol, even on our own dime, we would be sent home at our own expense.  We were not even allowed to have a glass of wine with our meals, even though us 10 students ranged in age from 23 to 50-something.  I don't drink alcohol, and even I thought this was ridiculous.  On the Minnesota trip, where there were no alcohol restrictions, nobody got hammered or caused any trouble, so we couldn't figure out why we were being treated like children.

In fact, Mary gave us every reason to doubt her competence.  For example, one morning we were about to cross the street to go to the Library of Congress. We students saw an ambulance coming toward us, with its sirens blaring and horn beeping, but the crosswalk sign said "walk" so Mary said very authoritatively, "Come on [children], let's go." And she started to walk out into the road!  We were all shouting at her to stop.  And the whole trip was like this.  My hotel roommate Kathy and I flat out refused to come down for dinner on the third night because we were tired and aching and couldn't walk anymore and because we were so sick of the constant confusion and miscommunication and disorganization.  We camped out in our hotel room and ate from the sack of Dunkin Donuts I had bought when I was supposed to be at the Kennedy Center.  Petty, I know, but I was desperate for some autonomy.

Now, I am young and in decent shape and I normally walk a lot anyway, but for this trip we were ordered to dress professionally all three days because we were "representing" the McNair program (as if any of the suits in Washington knew what the McNair program was or cared if we wore jeans and tennis shoes).  So I was doing all this walking in dress shoes for the first day, and I ended up throwing my dress shoes away in the hotel trash, and the other students were taking pictures of my feet because they were in such bad shape.  I had tried folding the heels down as well as wrapping my feet in Band-Aids, toilet paper, and sports tape, and the toilet paper shredded as I walked, so I left a trail of toilet paper shards all over the capital city of my country, but I was so overheated and bone-weary I hardly cared: 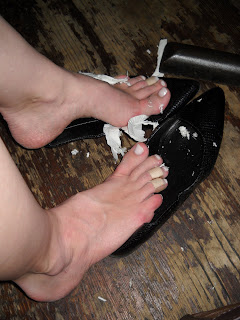 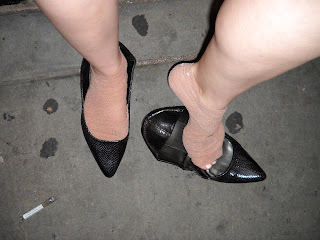 So while this trip was all expenses paid, it was one of those sticky traps where you realize you've relinquished control over basic decisions because you accepted a free ride.  Like when parents pay for college and insist their kid follow a certain career, whether the kid wants that career or not. Or when parents pay for a wedding and don't let the bride and groom pick the location or guestlist.  I must sound like an ungrateful, unappreciative, spoiled brat.  I'm usually not that way, I swear!  I'm the kind of person who writes thank-you notes.

If I were coordinating the trip, I would have given students a list of recommended educational sites to visit, then let them go wherever they wanted in groups of 2 or 3, for all three days.  Because we are all adults--prospective PhD students, for crying out loud!--and other adults cannot justly be held responsible for our decisions.

Anyway, by the third day I think Mary got sick of our bitching, so she let us have 6 hours to go where we wanted.  My first choice, naturally, was the Pentagon, for all its intrigue and mystery.  Then I went to the National Archives, and being alone for 6 hours was heavenly.  I sat down and rested and drank water when I wanted, without worrying whether 11 other people were wandering ahead of me or lagging behind me.  So, that's when I enjoyed the trip, on the afternoon of the last day.

Before we left I had asked about getting out of the trip, but to do that I would have had to reimburse Mary for over $700.  So since I had to be in DC anyway, I tried to at least relish in the cool pictures I took, like at the Capitol Building: 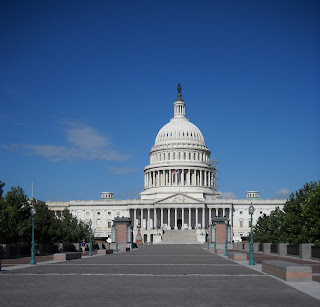 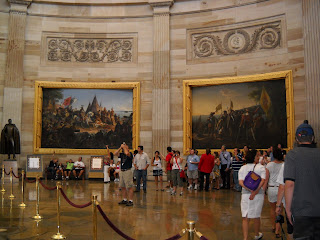 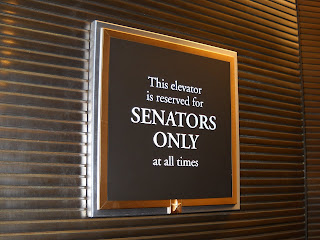 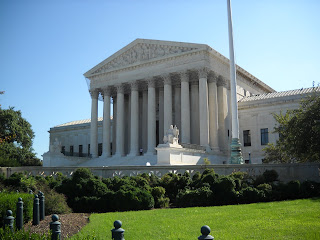 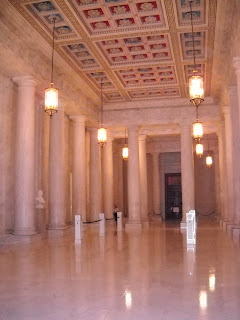 The Library of Congress (where I saw the Jefferson Library): 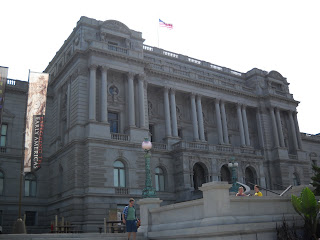 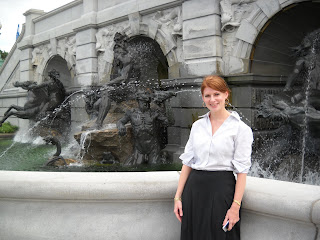 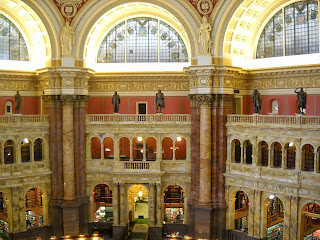 The National Archives (where I saw the original Declaration of Independence, Constitution, and Bill of Rights): 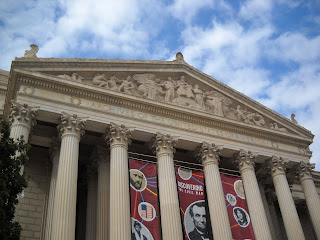 The Pentagon and its 9/11 Memorial (where one can see the new white stone patch contrasting against the old brown stone): 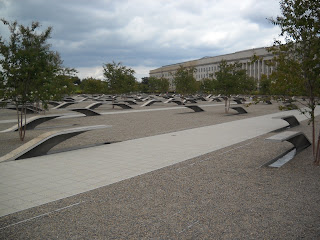 The Smithsonian (where I saw dinosaur and early mammal skeletons, the first Star Spangled Banner, the first rocket, and casts of famous early hominin skulls like Lucy and the Taung Child): 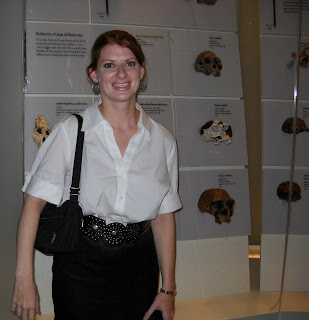 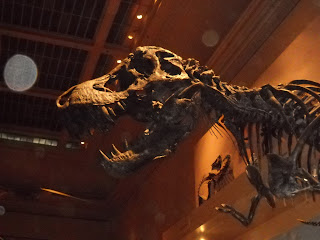 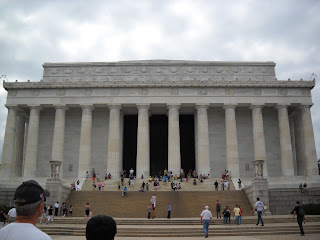 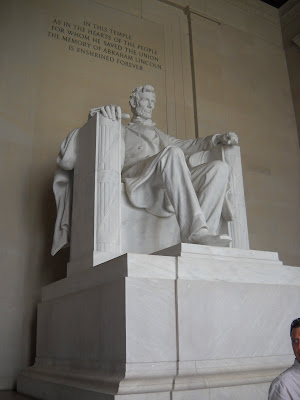 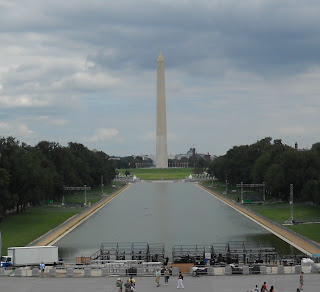 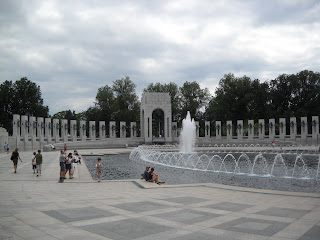 And the White House: 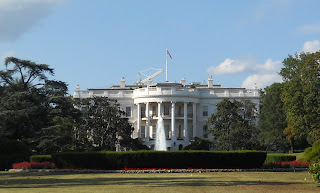 I also took the opportunity to try duck, salmon steak, and Chesapeake crab for the first time.  I had never had real, whole, local crab before, and I found it tasty (especially paired with Old Bay seasoning and corn on the cob) but not worth the mess and effort.  And yes, they gave us bibs: 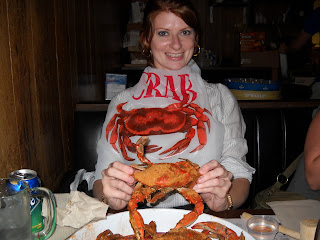 During all this touring, I had a lot of deep thoughts about democracy and failed states and colonialism and other political things I've learned about in school, but all of that was essentially overpowered by my aching, rotting feet.  About a week before the trip, when they made us sign these silly agreements and gave us this overwhelming itinerary, I realized that this excursion would be cutting into precious time I needed to finish other, more important things.  Like my research paper (I got an extension), my research presentation for the McNair showcase in September, and my studying for the GRE, which is scheduled for Wednesday.  Plus, we are required to write a two-page summary of the trip for the next time the McNair program gets audited.  I think I'll just print out this blog entry and hand it in.

What's worse, when I got back, I found several surprise letters from my health insurance saying my benefits were ending because they didn't request--and I didn't send--income verification in my renewal packet.  If they had sent me an email notification, I would have been able to respond while I was on this DC trip, but since they sent everything by paper mail, I had no idea.  And I can't reapply because it's state insurance and they have an application freeze because of overcrowding.  So...I don't have health care anymore.

I don't know how people can go on vacations or honeymoons for two weeks or a month or longer.  I was only gone 4.5 days and I came back to dirty laundry, full email inboxes, library book notices, an empty refridgerator, nearly flat bike tires, and no more health insurance, even though I am a very organized and conscientious person who uses a day planner religiously.  Maybe people who can afford big vacations can also afford an assistant or secretary to do these things for them.  Or a spouse.  Heh.

My relief came when the airport shuttle finally brought us back home, to our school's parking lot, and my Stevie was waiting there for me with hugs and kisses and a dozen white roses.  He carried my luggage, opened my doors, drove me home and groaned, "Ohh, I missed you so much.  I'm sooo happy to see you.  I missed your voice and your beauty and everything about you.  I love you." 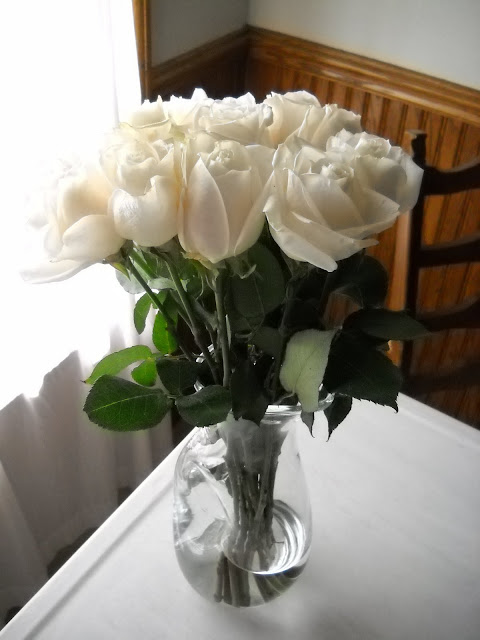