A Week in the Sin Cities

This week I visited the grad school at the University of Minnesota in Minneapolis.

I've traveled around the world, and I generally like travel.  However, I have always done so alone, and this time I was traveling with 8 other people.

Now, I am very grateful for all the McNair program has done and is doing for me, but I found out I don't like traveling with a lot of people.

And why is that, you say?

Because whenever a large group is trying to get somewhere or figure out where to go for dinner, it takes about 75 times as long to do it.  No one can decide or agree on what they want to eat, and every few minutes someone has to use the bathroom or get some water or change their clothes or something, so everyone else has to stop and wait.

And since you've been waiting so long, other people decide, "Hey, I might as well go have a smoke."  So they disappear to find a lighter or whatever, and you wait and wait some more!  Aaargghh!  If you keep going and leave them behind to catch up when they're done pooping or smoking, then you spend all day on your cell phone trying to help them get unlost and back with the group.

And even if everyone is being good and staying with the group, most people shuffle walk way too slow for my taste and walking slow makes me sleepy, especially in this August heat, and there's always one person who bitches about everything, and one person who runs way ahead and disappears leaving everyone else to wonder why they did that.

Man.  I'm normally really patient, but this was starting to get under my skin, and it made me really glad I've never gone on any study abroad trips.  I think I'd die of irritation if I had to travel with 15 or more people.  I think I could handle like 4 other people, max.

The good news is that with all the time we spent sitting around waiting for other people to use the bathroom and smoke and whatever, I got to know some of the McNair kids better, and I really like them as people.  While McNair is a scholarship program and we are all good students, there are no Ivanka Trumps or Fortunate Sons in this group.  Most of them are just like me--they had to overcome shitty circumstances to go to college and do well.  And I can't emphasize enough how much I appreciate that, because I find that people who had to work hard for their success are much more level-headed, sensible, independent, and easy-going than people who had their careers and their success and their personalities handed to them by their parents.

Tuesday night after we got to Minneapolis and checked into our hotel, the library was already closed, so the youngest 6 of us hit the town.  I used to live in downtown Minneapolis, so I led the gang to the 2-story downtown Target (by request), then to the Loon Cafe: 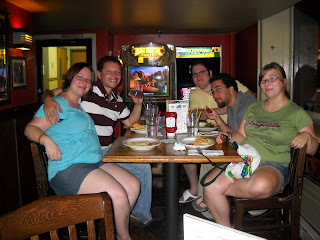 We then debated whether to go to Dreamgirls (a strip club) or to the Gay 90s bar around the corner.  We decided Gay 90s would be cheaper, but before we left the Loon, it started storming with a vengeance.  It was raining lions, tigers, and bears, and the streets became raging rivers.  So, we planned to run from one store awning to the next until we made it around the block to the gay bar.  Some of the kids were wearing leather shoes and took them off to run barefoot, and as 4 of us ran across the white rapids rushing down the street, one of the girls stepped on a piece of glass and started bleeding.  But she was trooper and we 4 stayed under the first awning while two guys were still across the street at the Loon because one of them was taking the most massive and time-consuming dump ever recorded in the history of man, and his friend kept checking on him to make sure he didn't pull an Elvis and die on the throne.

So the 4 of us were waiting on this staircase under a flap of fabric while this monsoon was swirling around us, and the sheets of rain were hitting the ground so hard they were making a splatter-mist cloud above the sidewalk, and the wind was blowing all that mist in our faces while the lightning and thunder were crashing overhead.  We were soaking wet and our hair was curling and we were laughing our heads off.  Finally we reached the Gay 90s and enjoyed the 2-for-1 drink specials and a drag show.  We clapped and hollered and tipped some really beautiful drag queens.  Seriously, gay bars are SO much more fun than "straight" bars, let me tell you.  It was freaking A W E S O M E and I highly recommend it: 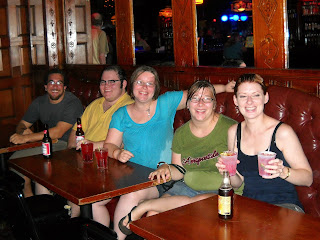 Unfortunately, Glass Foot Girl had to spend the entire next day in the Emergency Room and the radiology department where actual surgeons used live-motion x-rays to get that glass out of her foot.  She came back to the hotel with crutches and a bottle of Vicodin and her foot wrapped in a ball of bandages.  Poor girl.  I felt so terrible, but man, did we have a good time.  And fortunately she has insurance.

So, back to the good news.  For those of you who don't know, I plan to switch from political science to anthropology when I go to grad school, so as I'm visiting grad schools, I've only been touring the anthro departments.  And the anthro department at the U of M is incredible!  The department space and faculty offices are amazing, and there's even a lovely study lounge where people, especially grad students, can work in peace at their own desk.  There an entire hallway of up-to-date laboratories, like the human evolution laboratory, the primate ecology laboratory, and the stone tools laboratory.

This anthro department, unlike the one at UW Madison, seemed to actually care that we McNair scholars had come to visit, and they had a really nice lunch all ready for us, and the Director of Graduate Studies gave us a real tour, and six current anthro grad students came to answer our questions about the school and the town itself, and one of the archaeology faculty was there to chat with us.  I was totally seduced, and I'll definitely be applying.  Accepted grad students are promised 5 years of funding!  I was just so impressed with the entire department.  The people seemed really helpful and funny and knowledgeable, they've answered my emails quickly (even the ones who are doing research on other continents!), and I couldn't get over how nice and spacious and well-equipped their labs are.

So the next day we went to a poster symposium to see the research projects of other scholars from around the country, and that was okay.  There were a few fascinating projects there, and over their gourmet catered lunch I chatted with a kid from Somalia who is an undergrad at the U of M and who has plans to go into international law.  So that was interesting.  Then the McNair scholars left to return to Wisconsin while I stayed behind to visit my posh friends Kurt and Tammy at the Loring Kitchen and Bar, where it was, once again, 93 degrees and storming like mad.  I'm wearing posh shoes in this picture, I swear: 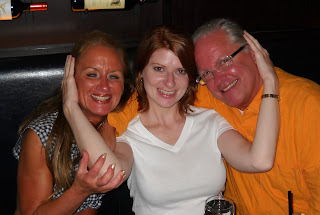 At 1am the next morning I caught a Greyhound home.  Now, in my younger days I used to take Greyhounds back and forth across the U.S. all the time and I have no idea how I tolerated such long distances on them.  I mean, we're talking L.A. to Ohio and Portland to Wisconsin and Florida and back.  This time I only went from Minneapolis to eastern Wisconsin, and sleep was pulling at my eyes but I couldn't get comfortable and there was a ton of lightning flashing in my face, so I was essentially awake for 34 hours.  (My personal record is 40 hours.)

During this time I had a 5-hour layover in Milwaukee and since I had nowhere safe/comfortable to sleep and I was too tired to concentrate on anything at the library, I stumbled around downtown for a while.  It was sweltering in the city but as soon as I got to Lake Michigan, there was a palpable temperature drop and the breeze was so cool and fresh, and a morning fog was blowing in over the over the city: 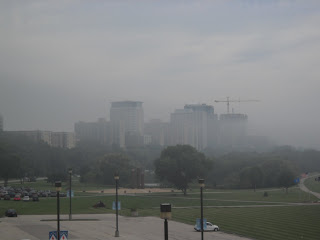 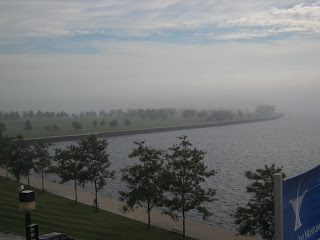 (No, it was not smog because the haze was a clear white and it repeatedly lifted and descended as I watched.)

The other good news is that I saw a TJ Maxx there on Wisconsin Avenue and since I had never been in one before, I went in and found the $60 pair of New Balance shoes I've been wanting on clearance for $20!  In my size!  I've been working out and running 5Ks in the same single pair of Reeboks for over 8 (eight) years--the treads are gone and the insoles are all ripped up--so I've long been contemplating getting a new pair.  Here are the new ones: 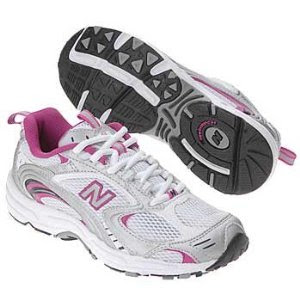 I got back around 3:30pm on Friday, and by 4 o'clock I was showered and in bed, thinking I'd take a 2-hour nap.  Well, when I woke up it was dark out, and it was--surprise!--5:15am.  I had slept, without tossing or turning or waking up even once, for 13 hours straight.  So I had NO idea what had happened around me while the Earth completed an entire half rotation.  Did my house burn down?  Did my phone ring?  Did it thunderstorm?  Did my upstairs neighbors throw an obnoxious party?  Did anything exciting happen on the street in front of my house?  Did the neighbor's tom come and meow under my window all night?  I don't know!  All I knew is that I had never felt so thirsty in my entire life, and that, even after downing tons of water, I felt really weird for the next few hours, like I had fallen out of a time machine, like my mind was walking a different road than my body.  I assume that's what it feels like to come out of a coma?

So anyway, despite my complaints about traveling with a large group, I got a lot out of this trip.  It was good.  A week from today the McNair group leaves for Washington DC to visit the sites and tour the University of Maryland at College Park.  So stay tuned for pictures from DC!  I've always wanted to go to the East Coast, and here I will get to do it, all expenses paid.  I'm not a religious person and therefore don't believe in "blessings," but I count my "good lucks" every night, believe me.
Posted by An Extra Human at 18:42
Email ThisBlogThis!Share to TwitterShare to FacebookShare to Pinterest
Newer Post Older Post Home