The Math Emperor Has No Clothes

Last night nine of us eleven McNair scholars presented our undergrad summer research projects in one of our school's conference rooms. The lights were low, everyone was dressed up, and the tables were covered with pretty linens and flatware--though the food was high on appearance and low on taste...

Each of us scholars had invited our project's faculty advisor and up to 6 extra guests. I had invited my boyfriend plus 5 of my professors, and only the boyfriend showed up!  Oh well.  The good news is that everyone else's guests came, so there were about 50 people in the audience.

The McNair's program's two coordinator-ladies had said we were each required to make a PowerPoint show and to keep our presentations to 10 minutes each. I had planned on going first just to get this ordeal over with, but when I arrived, they had already scheduled us to go in alphabetical order, so I was second to last! Boo! And, as you may have guessed, each person took progressively longer for their show, so by the time we got to person number 4, 5, or 6, the presentations were running about 20 minutes each. Now, I don't know if you've ever watched 9 (nine) PowerPoint presentations all in a row, but fuck. It was  a g o n y. Especially having to anxiously sit there for literally HOURS before it was my turn. After dinner, after everything was all said and done, we had been locked in this PowerPoint hell for nearly 4 hours.

When it finally WAS my turn, I was actually pretty pumped, and I think I did okay. I didn't stutter or shake or stumble too much, and kept my show down to 10 minutes, just as I had practiced. And I sorta like putting on little shows for people, once I get into my groove.

Anyway, what I really wanted to discuss here was the content of the other presentations. I thought most of them were interesting, and a few were approaching Snoozeville, but one of them kind of troubled me. That one was presented by someone I've known for a little while and consider a good acquaintance, or even maybe a borderline friend. Let's call him Brain. Brain is just slightly older than me, but far surpasses me (and everyone else I know) in intelligence--that geeky, pedantic, Mensa-ish, know-it-all intelligence that corrects you on everything. But Brain does have some redeeming qualities, such as his ability to make everyone laugh, his charmingly jaded attitude, and his relative good looks.

Now, remember those puzzles you did as a kid where the pieces were square and there were different patterns on each border and you had to match them all up? Looked something like this: 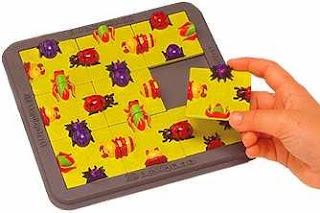 Well, over the summer, Brain had told me he was working on a puzzle like this for his research, except it was a really big, ultra-complicated one.  It's so complicated that there is a $2 million prize to the first person who solves it. I didn't know how that could be formatted as a research project, with hypothesis, data collection, findings, and conclusion, but I figured math research must have a different format than regular research. Plus I was a little afraid to ask, because Brain is so smart and I have to really censor what I say around him. One time I couldn't recall who James Randi was, and Brain dropped his head into his hands and groaned. "Oh my god, I can't believe you just said that!" He writhed like he was in pain.

I feared I had just accidentally revealed that I was of mere average intelligence, and I panicked.  "I'm sorry! Do you think I'm stupid now?"

"Yes!" he exclaimed. "You're the Freethinkers girl...how can you not know who that is?!"

So when Brain gave his presentation last night, I was expecting an interesting math lesson, but his show consisted almost entirely of huge PowerPoint slides crammed with these eyesores of neon-colored triangles, accompanied by random arrows and charts of combinations of ABCDBCDADCCDABB, and I looked at the audience's faces and I couldn't help it. I sat there shaking with my head down and tears coming from my eyes, and little noises coming from my throat because I was laughing that hard. Then Brain came to another slide that was this huge black, white, and gray pattern of what looked like a thousand little fishes in boxes, and I leaned over to Stevie, trying to catch my breath with laughing-tears streaming down my face, and whispered, "What exactly are we looking at?" I just felt like we were being given a group Rorschach test, but in neon color, and we were all just sitting there, not knowing what to do. And mass confusion really, really appeals to my sense of humor. I wondered if a single person in the audience understood anything Brain was saying, and that made me laugh even harder.

But as funny as I found the slides' affect on the audience, it soon occurred to me that Brain hadn't really done any research at all. He had not identified a phenomenon, posed a research question, formed a thesis, or collected and analyzed any data. He had spent the whole summer playing with a colored puzzle in order to win $2 million for himself. (Of course he didn't win, but he got very close to the highest recorded score in the world.)

"Any questions?" he said.  And that was it.  Presentation was over.  It was now question time.

I raised my hand.

One of the people at my table grinned and whispered to me, "Busted!"

Brain said calmly, as if he were explaining to a child, "Well, if I would have solved the puzzle, it would have contributed $2 million to my wallet."

He continued. "But there are practical applications to solving NP-complete problems..." He went on to say that certain [obscure] medical technologies may benefit from such a discovery.  His puzzle, he said, actually fell under the umbrella of "recreational mathematics, which is exactly what it sounds like."

However, Brain did not solve this puzzle, so no obscure medical technologies will benefit from his "recreational mathematics," and I was left to assume that he had contributed nothing at all to public knowledge or to the field of mathematics. The problem with this is that we McNair scholars got paid a lot of money to do our research through the McNair program, which gets its money from the government, which gets its money from taxpayers. Brain had received thousands of dollars of taxpayer money to play with this puzzle whether he solved it or not. But if he had solved it, what would that have done, really, besides shown other puzzle-players how to solve a big picture puzzle? What does winning a competitive picture puzzle have to do with solving NP-complete problems? How would it have addressed any of the real and urgent problems in this world? Oh, right...it...wouldn't. Winning a competitive picture puzzle contest doesn't make buildings safer or build stronger bridges or create more accurate mapping systems. It is a completely irrelevant game and has, from what I could tell, no practical application, and here it was being presented as formal research--by someone I had considered to be an invincibly smart person.

This year is Brain's third year in the McNair program, his third year receiving McNair/taxpayer money. I don't know what his previous years' projects were, but the other problem is that the McNair coordinator-ladies knew far in advance that Brain was playing with a puzzle as his research project this summer. I can't believe they never said anything, never called him on it. Why didn't they ask the question I did, and tell him that if you are receiving public money, you need to be contributing to the public good? Were they simply satisfied by big math words like "nondeterministic polynomial time"?

I dunno. I can't even really say I care that much about what Brain is doing, because I have my own life and my own worries and there are probably other factors in picture puzzle applications of which I'm unaware. But I just felt like I was witnessing petty fraud, and that I was in a room full of people who weren't saying anything, who were also fooled by these eye-twisting patterns of neon triangles and math jargon. It was just like Harry Truman said: "If you can't convince them, confuse them."

After Brain finished fielding more benign questions from the audience, I watched him stride back to his table and take his seat. I remember focusing on the outline of his face and the shadows playing across the bridge of his nose, and thinking his intelligence wasn't so geeky and fun and charming anymore, but a little more shady, arrogant, and blatantly selfish. Misused, really.

Fast forward to this afternoon, to my senior capstone class. The professor of this class is one of the 6 people I had invited but didn't show last night. As soon as he saw me today, he said, "So Hope, I heard some interesting stories about last night's McNair presentations."

I bared my teeth in a guilty fashion.

He continued, "I heard from Professor [so-and-so] that none of the projects were actually worthy of receving McNair funding."

I frowned. "They thought mine wasn't worthy?"

"Oh no, they thought yours was alright, but they said that the others were beyond horrible."

"Really? I thought a few of them were okay."

"Well, maybe [so-and-so] was just saying that to tell a good story! So how was it?"

I summarized the math-puzzle fiasco. The professor scoffed, then looked at the clock. It was time for our regularly scheduled teaching program. We got into our little groups to critique our classmates' research papers. As my group discussed theses and literature on the American presidency, I mentioned to one guy that "You can disagree with scholars."