When there aren't bats and squirrels in my walls and centipedes all over my floor, my upstairs neighbor is weeping and howling.  She replaced Crackhead McStomperson when she moved in this past September, and for the first month I heard her and some guy constantly arguing up there.  Then he seemed to stop coming over, and she (let's call her "Nance") began having these long, daily weeping spells.  I can hear it clearly from every room in my tiny apartment, and even more clearly when I step out into the common hallway and stairs.  Her wails echo throughout the entire building, just like in the movies during scenes of mental hospitals. 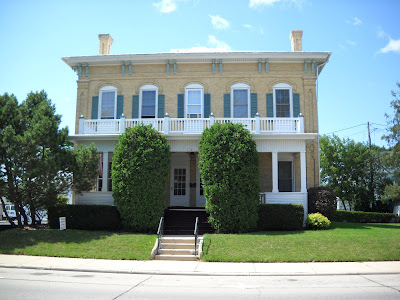 My apartment building.
This weeping has been going on since about October, and it has occurred nearly every day, for up to two hours per day.  I had been wondering what exactly was wrong with this woman, what would cause someone to weep so loudly and freely, and if I should go up there and ask if she's okay, or if she'd be offended and attack me.  I wondered about that Kitty Genovese law that says you have to help when people are screaming for help.

So yesterday morning as I was preparing to leave for school, Nance was doing something outside her 2nd floor door, either cleaning or moving something, and so effectively brought her weeping spell into the upstairs hallway, to the edge of the stairs that lead down to my doorstep.  Since the wailing was now louder than I had ever heard it, I was a little frightened that she was about to do something violent, so I quietly cracked my door open and kept an eye on the developments.  Fortunately, Nance did not resort to violence, nor did she come downstairs.  She was just on the phone again, her voice oscillating between a shrill quiver and a desperate growl.  She yelled at the listener about being lonely, about being tired of having no one to care about her, about so many people treating her like shit, about this man teaching her a "lesson" that he doesn't love her, that he was so wonderful, that he was smart and funny and could talk at length about philosophy and music and theater, and that he sent her an email saying, "You don't know me."  Well, describing that email just set Nance off into another tizzy.  Her voice spiraled upward and her lips sounded like they were covered in snot.  She blew her nose.  "I'm 49 years old and ready to settle down!" she shrieked into her phone. "He was my ideal match!!  What am I supposed to do?! I don't want fancy cars or a lot of money or a big career, I just want him! That's all I need!"

She then returned to her apartment and proceeded to throw around some pots and pans and shake my ceilings with her stomping.  As I finally left for school, I chuckled to myself and thought, All this time, she's been crying about some stupid guy?  That's all that this is about?  Jeez, I thought it was something important.

I thought this because I've been a feminist for almost my whole life, and have always thought it a waste of a woman's time to worry about a man, because he most certainly isn't worrying about her.  This is because men generally see people as objects and treat them accordingly, and to them women are sex objects--cum dumpsters, essentially.  To combat this, a woman should (ideally) be too concerned with being fabulous, with building a career, becoming a better person, helping others, being happy and healthy and accomplishing all the things she ever dreamed of.  A woman should never worry or care about what some idiot man thinks of her or her style, because he definitely does not have her best interests in mind, and never will.  He is biologically programmed to want only one thing.

Harsh, I know.  Not all feminists believe this, and most women do not consider themselves feminists anyway.  Instead they believe that men can make them happy, so they cater to men's whims and desires and believe that men feel and think the same way they do (false!), and a lot of women spend their entire lives chasing romantic relationships--wishing they were in one, analyzing the last one they were in, or regretting or obsessing over the one they're currently in.  It probably translates into something like 8 years that the average woman spends of her lifetime worrying about some man, likely one who doesn't give two shits about her to begin with.

Despite my ideals, I'm as guilty of such obsessing as anyone.  And the more I thought about it, the more I realized that the only difference between me and Nance in terms of expressing distress over breakups is that she is loud and I am nearly silent, because I'm more self-conscious and worried about social status, about appearing sane and calm and normal.

You may be laughing at Nance, but haven't you had a horrible breakup at least once in your life?  I am currently single, but have had several boyfriends and thus several breakups.  Most of these breakups were laughable, where I didn't really feel anything afterward because the guy turned out to be a dumbass and I was overjoyed to be rid of his stupidity and his dingleberries forever.

However, I've had 2 breakups that really knocked me off my feet for about a year afterward: one in 2005 and another in 2009.  They left me utterly bereft.  I have not yet experienced the death of a loved one, but I imagine that it feels something like how these 2 bad breakups did--like my soul was rotting away from the inside, like I just couldn't face another day, like I was shackled to this debilitating memory that would always haunt me and never leave.  Even though I was the initiator of both these bad breakups, the fact that I loved these men deeply but knew we were fundamentally incompatible was devastating beyond words.  In the days and weeks following, I was just barely able to function.  Getting up and going to work or school was an almost impossible task.  I couldn't concentrate on anything, and alternated from periods of icy numbness to waves of hot anger and burning sorrow.  For months I fell asleep crying every night and woke up crying every morning, and sometimes had to get up in the middle of the night to change my pillowcase because I had soaked the entire thing in tears.  Tears would also start slipping down my face at random times, like when I was walking down the street or browsing in the produce aisle at the grocery store, to the point where I wore sunglasses as much as possible.

Though I have to say, I never did scream or howl or abuse my cookware over a man.  I did try to shield innocent bystanders from my grief as much as possible, because I think crying in front of other people is really rude.  First, because it's rude to take your personal problems out on people who have nothing to do with it, and second, it's disruptive.  Crying makes people uncomfortable and uneasy, and even worse, it makes them doubt your sanity.  Why give people that option?  Unless you are obviously and severely injured, crying makes you look like you've lost your fucking mind, like you're unstable, irrational, and a loose cannon.  So after these 2 bad breakups, I expelled all my tears quietly into my pillow or into toilet paper while standing in a bathroom stall--no disrupting my neighbors with loud wailing or stomping or throwing pots and pans.

I realize that Nance may be somewhat mentally ill, what with being 49 and still not having learned how to cry quietly and all.  But maybe her parents simply never taught her to cry quietly.  The process of teaching a child to cry quietly and in private instead of loudly and in common areas can be a little tricky, because it usually ends up invalidating their feelings and thus scarring them for life.  For instance, when I was growing up, any whining or crying was met with snide laughter or with yelling: "Shut up, before I really give you something to cry about!"

That technique is not recommended.

Regardless of whether Nance is mentally ill or not, she is going through a lot of pain, and it's sick to laugh at another person's pain.  Laughing was my inital reaction, but I'm not laughing anymore.  Instead, I am sorry that circumstance has forced her to walk that awful road, Rue de Bad Breakup.  I sincerely hope she feels better soon.

While I can't give any advice on death, I can offer a few words if you, dear reader, are going through a bad breakup:

Remember that today will probably be shitty, and tomorrow and the next day too, but in a few weeks things will be better, and in a few months things will even be tolerable.  There will come a surprising yet wonderful time down the road when the shackles of memory do break loose.  You'll start to forget a lot of things about that person you loved so much, like all the little details of their face and where all their moles and freckles were.  You won't hear their voice in your head so much, you'll forget their phone number, you'll forget the names of their pets and siblings, you'll forget exactly what day and time you broke up.  And eventually, all the things you do remember about them will be reduced to meaningless factoids--dates and places you can recite without emotion, like a multiplication table.  And you'll realize you don't know them anymore, that they've returned to being a stranger, just like they were before you met them.  It's like birth in reverse.