I Called the Fuzz on The Weeper

Last weekend, my deranged upstairs neighbor, aka The Weeper, aka "Nance," was having another really bad screaming fit.

I quietly opened my apartment door and poked my head out to get clearer reception. [Reminder: Nance lives directly above me in a 5-tenant building.]  The hall and stairs were silent except for her, and her sobs and heaves were proceeding through their normal cycles: they'd intensify, then suddenly stop, then her normal voice would resume.  Then she'd get louder and louder, until her words were racing, her voice spiraling upwards into a rage that pushed the edges of her vocal cords in a suppressed explosion of desperation and anger.  The content of her rants hasn't changed since the last time I wrote about this; it still consists of shrill, repetitive, profanity-filled complaints about men.  Still the same irrational, sweeping generalizations.

It was the same script last weekend, except she added a peculiar twist: "I'm going to walk down to the river and throw myself in the water and hit my head on a rock and sink to the bottom and die and be done with this, 'cause I've been crying and crying and now I'm screaming in my apartment!"

Then, softly weeping, begging: "No, no, Karen, don't hang up, don't leave me!  [Angry growl] If you leave me, I'm going to drive on the wrong side of the road and crash head-first into another car!  Now look--you've gotten me all upset!  I didn't say a word!  It was you!  You made me all upset and now you're just going to leave me!"

I quickly retrieved my mp3 player, which has a very sensitive recording device on it, and was able to capture the end of this particular conniption--the yelling, the unbridled rage, the savage growling.

The woman terrifies me.  It feels as though there is a pacing, provoked, wild animal upstairs, like a grizzly bear or a panther, just waiting for the signal to strike.

My heart actually skips a beat when I hear the beginnings of another one these screaming fits, even though it happens almost every day.  When I'm not sticking my head into the hallway to eavesdrop monitor the situation, I make sure the deadbolt on my door is in the locked position, because I have simply never heard an adult person surrender so completely to their anger--it reminds me of certain scenes in The Exorcist.  Not only does Nance scream, but she throws heavy objects and pounds on the floor and walls, and sometimes this activates my fight or flight response.  My shoulders tense, my ears prick up, my eyes open wide.  Violence is near.  Directly above my head, as a matter of fact.  It scares me.

So on this night last weekend, after about an hour, the screaming subsided and I closed (and locked) my door, then sat quietly and thought for some time about Nance's suicidal talk.  How many times have I listened to news segments about shootings or suicides or other acts of violence, where nearly each time the perpetrator gave many advance warnings but no one listened--or if they did listen, chose to do nothing?  Bystanders "didn't want to get involved," they thought the person was "only joking."  They wanted to "mind their own business."

I didn't know if Nance was truly a danger to herself or to society.  Was she really tempted to drown herself?  Could she possibly maim or kill an innocent person if she had a depressive episode while driving and intentionally veered into the wrong lane?  I felt sick thinking about this, and resented that I've had to listen to her garbage over and over, almost every single night, since October, when Nance broke up with this sunken dreamboat of hers.  Still, my gut was urging, urging, urging:  She's really, really sick.  She needs help. I have to help.

Thoughts bounced back and forth.  But I don't know what to do!  Should I call someone?  Who?  If I call the police, it'll go on my landlord's record, and what if he finds out it was me who called?  He might not give me a good reference when I move in September.

But what is that compared to a crazed person taking someone's life?  What if she brings home a gun one of these days and goes postal?  What is my responsibility here?

No one's going to die.  I'm just being a drama queen, because humans like to be part of a crisis.

I finally decided called the police department's non-emergency number, and explained Nance's suicidal remarks.  "I don't know if I've called the right number, or if I should be calling anyone at all," I added.  "It sounded like she was talking on the phone, so I don't know if she's just joking, or if she was just saying that to get a rise out of someone.  I don't know what to do."

The officer assured me I had done the right thing and called the right people.  But as soon as I hung up, I instantly regretted everything.  The police are coming, all because of me.  I'm creating drama where there is none.

The officer was there in a few minutes, and summoned me to show him which door for sure was Nance's.  He was wearing a big square furry hat, like the kind featured in Fargo: 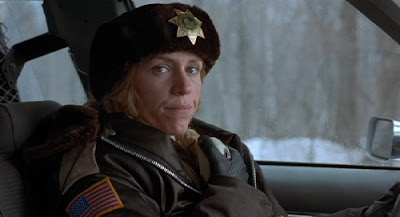 He was very nice, and spoke softly.  "But she stopped screaming about 20 minutes ago," I said, then hurried back to my apartment.  The radio on his belt echoed eerily through the otherwise silent hallway, but that was the only thing I could hear as I pressed my ear to my door for the next several minutes.

That was a week ago, and Nance hasn't had a screaming fit since then.  Which is shocking.

She still cries, but more quietly.

And I don't know what that means, if anything.
Posted by An Extra Human at 02:07
Email ThisBlogThis!Share to TwitterShare to FacebookShare to Pinterest
Newer Post Older Post Home