I seriously did wake up at 5am this morning to go running.

And though I had every intention of running outdoors, apparently "the winter storm of the century" started last night, so the snow this morning was too deep.  Instead Stefan (my running partner) and I went to the local YMCA and used their cement track.  That's right, I said cement. 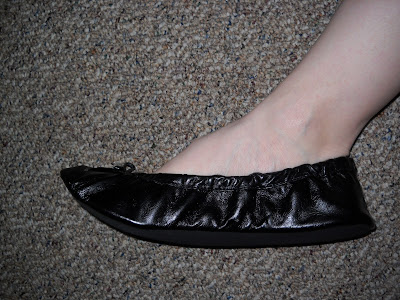 And it was good!  We were only on the track for a half hour, but my feet felt (and still feel) absolutely fine.  For the first time ever, running was...well...fun.  Light, free, and easy.  Like skipping.  When I used to run with shoes, running was, at best, an awkward, difficult, and labor-intensive chore, or, at worst, an excercise in raw willpower.  Torture, even.  But this was such a different experience.  After running several laps in these ballet flats (and fielding questions from the Centrum Silver crowd shuffling along the track), I still wasn't sweaty at all or out of breath even a little.  I probably burned, like, a fourth of a Calorie, and thus didn't feel depleted afterward.  I'm telling you, minimalist running is where it's at!  This is how nature intended humans to run.  In fact, the one and only reason I stopped was because my calves got tight, since my muscles are really out of shape from lack of use.  But tone and strength will come in time.

And as soon as I build up some decent calluses, I'm ditching the ballet flats and going completely bare!
Posted by An Extra Human at 07:00
Email ThisBlogThis!Share to TwitterShare to FacebookShare to Pinterest
Newer Post Older Post Home