It is with great sorrow that I write to inform you that the Shamrock Shuffle 5K did not go as planned. 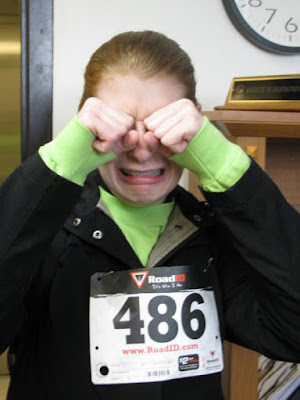 (photo courtesty of Tracy Slagter)
Remember in my previous post how I told you those huaraches were so great?  Yeah...when I was running in them on Thursday, they felt wonderful.  I didn't feel a single twinge of pain or even mild discomfort those entire 5 miles.  I had a long cool-down session, too.  Sure, I could feel the toe knots, but they didn't actually hurt.  And when I got home, I stretched and washed up and wrote that blog post and went to bed.
Well.
The next morning I woke up with the absolute worst case of DOMS (delayed onset muscle soreness) in my calves, to the point where I couldn't walk without gasping and grimacing.  Not only that, but the spaces in between my toes where the nylon cord had been touching had huge, painful blisters.  So all day Friday I had to hobble and scowl through school and work, and it was horrible.  I walked home, I stretched my legs like crazy, and massaged them, and drank tons of water, and ate some quality protein, and went to bed hoping that I would be good for today, the 5K day.
Nope.
I woke up Saturday just as sore as I was Friday morning, in total agony.
I was so mad at myself.  I should have tried out those huaraches much earlier, not two days before the run.  What the hell was I thinking?
I considered not going to this Shamrock Shuffle at all, but I was part of a team for school, so I decided I would go and just walk the whole way.  Or stumble and limp, anyhow.
That would have been alright, I suppose, except that it was wet and icy and 33 degrees with 30mph wind gusts.  And since everyone else would undoubtedly be wearing workout clothes, I passed up my typcial winter gear of boots, jeans, and a heavy suede coat for workout clothes, too.  So I was dressed inappropriately for the weather.  I forgot my gloves.  I forgot my MP3 player.  And because I had planned on running this thing seriously and without distractions, I didn't bring a friend.  So it was a very boring, lonely, freezing, miserable, painful 3.1 miles.  You know how when you eat a piece of chicken and you get a big chunk of white meat and you peel it open and you can hear the muscle fibers tearing?  That's how my calves felt with every. single. step.  I really had to concentrate on relaxing and breathing and just putting one foot in front of the other in order to finish.  It took me 50 minutes to stagger through the whole course.  A disgrace!
Our team captain took a couple dozen pictures, and I was so bummed I could only force myself to smile normally for one or two of them.  In all the rest I was making a half-angry, half-silly face.  Grruugh!!  I was just so pissed at myself.
And I hate that feeling.  For much of the day I was trying to remember that most bad feelings arise through misplaced expectations.  I had been looking forward to this event since March 2010 when I first heard of it, and I had expected that I would run this one competitively.  I had expected that I would run it in a good time, that I would do so either barefoot or with a minimalist shoe, and that I might convince a few other people to consider minimalist running.
I had all these expectations, and none of them manifested.  Even if I had been in tip-top shape today, something else might have happened to make the whole day go awry.  Maybe I would have gotten hit by a cement truck, for example.
If I had just expected nothing at all, or been open to the event taking any kind of twist or turn, then I wouldn't have been so disappointed.  Not that it's wrong to feel disappointed or angry or bummed.  It just feels icky.  And it makes one look like a grump.
So the half-marathon is in one month.  I am practicing having no expectations about it whatsoever.  Maybe it will go beautifully, and maybe it will be a total fucking disaster.  I am working to be okay with either outcome.
Posted by An Extra Human at 18:44
Email ThisBlogThis!Share to TwitterShare to FacebookShare to Pinterest
Newer Post Older Post Home