So sorry I haven't posted in a while...so many things on my mind and so little time to write about them!  Hmm, where to begin?

Well, at this moment I am supposed to be at ASU for their Admitted Students Barbecue Weekend, but was unable to go due to lack of funds (and my "free" AirTran ticket can't be redeemed in March, which is pretty much one big blackout date).  I do plan to visit ASU eventually, but what I want to do is wait until I hear from the other 3 schools I applied to.  If I get accepted to Missouri or California, I'd like to rent a car and take a road trip and get all these visits knocked out at once, Thelma and Louise style.  Because, y'all, I HATE flying.

So I am designing a research project for my Human Evolution 378 class.  The requirement for this project is that it has to incorporate osteological measurements in the answering of our hypothesis, and our lab has a limited selection of specimens.  I had several ideas relating to upper bodies and sexual dimorphism, but our lab only has two torsos, and they're both from modern humans.  No early Homo.  So I instead reverted to one of my other favorite bone topics: teeth.  Specifically, wisdom teeth.  There are lots of skulls and mandibles in our lab, some even with impacted wisdom teeth, so now I just have to come up with a specific research question about wisdom teeth.  Exciting, no?

My trip to present my summer 2010 McNair project at the National Conference for Undergraduate Research is coming up.  I leave on March 30, and will be missing 3 days of school.  I have to reformat my entire 24-page paper to be published in the conference's proceedings, and I have to make a poster.  Fortunately I will get two uses out of the poster, because I will be presenting the same project at my school's Celebration of Scholarship Day on April 28.

A few weeks ago I got an email from my school's grant office, asking for an interview so I could be featured on their student research website.  So I went and did this little interview, and am supposed to have my picture taken as well.  Then two days ago I got the exact same email request from the political science department (since I'm a poli sci major).  They want to feature past and present students.  So I guess I'll be doing another little interview and getting my picture taken.  I told the poli sci guy that I'd only do it if I was allowed to wear a feather boa in the picture.

The Shamrock Shuffle 5K is exactly one week from today, and the half-marathon is 6 weeks away.

When I went to pay my half-marathon registration fee a few weeks ago, I tried on a couple different pairs of Vibrams, just to see what they were like, and they were super comfy.  Fucking hideous, and too expensive for me, but super comfy.  Too comfy, I thought.  And that's why I didn't buy them.  They were so comfortable that they made heel-striking an option, and that's exactly what I want to avoid! 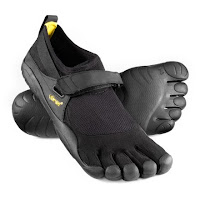 Well, that, and I'd only be using them for these two running events.  I wouldn't be caught dead wearing such eyesores with jeans during the day, and I am greatly looking forward to returning to my sedentary ways after the half-marathon, because I just don't like running.  I don't.  Now that the novelty of barefoot running has worn of, running is boring again.  Just like it always was.  I have never liked running.  I always feel like people are looking at me, mentally criticizing my form or how bad I look all sweaty with no makeup.  And running barefoot or with minimal shoes?  If people weren't looking at me before, they certainly are now.

Plus, there just aren't any good, natural places to run.  I can run in the city and nearly suffocate from all the car, truck, and factory fumes, or I can run in the park or on a nature trail, which means I have to travel to get there.  And I hate the idea of driving or taking the bus to travel somewhere else to run.  To me that just makes no sense.  The running itself should be the transport.  If I lived out in the country, I wouldn't even run out there, because there are no sidewalks, so you have to run in the road, facing cars, which gives motorists a really good opportunity to stare at you (and mentally criticize your form or your outfit or your sweaty, exhausted expression, or curse you for being in their way).  Running makes me feel strong and healthy, but it messes with my head a LOT, so there's no real net gain.

Anyway, if you were wanting a barefoot running tip instead of a litany of complaints, I've discovered that running in 30-degree dry weather is less painful than running in 50-degree wet weather.  There's just something about water that makes a sidewalk excruciatingly, intolerably cold.

So that's all I have time to write for now.  Next up, I will discuss CCAP, my Intro to Law class, and this whole Wisconsin uprising thing.  Stay tuned!
Posted by An Extra Human at 08:40
Email ThisBlogThis!Share to TwitterShare to FacebookShare to Pinterest
Newer Post Older Post Home