I have moved across continents and oceans numerous times before.

Each of those times, everything I owned could fit into two suitcases and a carry-on.  Between the ages of 18 and 24, I bounced around the world, living out of these suitcases, owning next to nothing, eating off dollar menus, sleeping in tents, on floors, couches, folding cots, or plastic-covered beds that other people weren't using.  I traveled a lot, moved a lot, saw a lot of places, and met a lot of interesting drug addicts people.  But for these six years I did not have a "home."  I was just...crashing.

When I came back from Europe in 2006, I returned to my Wisconsin hometown and vowed to not move anymore.  I was going to settle down, get a steady job, go back to school, and stay in one place like a normal person.  No more vagabonding.

Over the next four years I stayed in one town and built up a lovely little nest for myself.  For the first time in my life I had a comfortable home that was all arranged and decorated to my liking--a peaceful, clean, inviting (albeit small) refuge from the cruel, cruel world.  And this meant a lot to me.  I also got into the habit of entertaining, cooking for other people, and inviting friends over without worrying they'd think my place was a dump.  I got to greatly enjoy having people over.

Only during the end of my junior year did I seriously start to consider grad school.  Up until then I had planned to stay in Wisconsin forever.  It's lush and green, has low crime, good public schools, low cost of living, reasonable real estate, friendly people.  It truly is a great place to live.  (Well, it was until Scott Walker and his cronies fucked it all up.  But that's another story for another day.)

Now, I admit, there were still a few slivers of wanderlust in me and I'd been feeling the need for a change of scenery, so when I was selecting schools to apply to, I didn't consider location at all and instead focused on the quality of the school's program and the renown of its professors.  Of the four schools I applied to, I was rejected by three (U of California Davis, New York U, and Washington U of St Louis), and accepted by one: Arizona State.  I'll add here that getting accepted anywhere was a TOTAL shock and surprise.

So I got over my shock, and today started planning my move from Wisconsin to the Phoenix metro area.  Calculating costs, looking at average rents, making to-do lists, gathering facts and maps online.  The first day of school is August 18, so I want to get there in late July.

That's right, I want to move to the middle of the desert during the hottest month of the year.  To get all cozy and settled in.  Or bake to death.  One or the other.

The latter happened to me the last time I went to Arizona, in 2000.  Again, it was the middle of July and it was  h o r r i b l e.  And today I started thinking about everything I've learned over the past few years about climate change and environmental degradation, and the thought of living in a desert started to make me really nervous.  If experts are predicting that future wars will be fought over water, what am I doing moving from the Great Lakes to a desert?

I spent a lot of time scrolling over the Phoenix area with Google Earth and fretting about this.  Look at those miles and miles of cement!  Look at that smog!  Look at that sprawl!  It was so hot and miserable the last time I was there, and I was constantly thirsty, no matter how much water I drank.  Like, the cement was steaming and the sand was steaming and everything was all wavy and psychedelic, like in a mirage.  All the people who say dry heat is better than humid heat are WRONG! 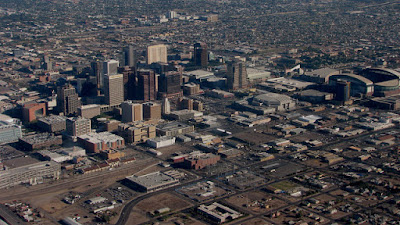 And it's where I'll be moving to and staying for the next 5-7 years!

I'm not feeling good about this right now.  And what's weird is that for a long time I had a thing for deserts, with their blazing canyons, barren beauty, fascinating geology, and mystical Native American art.

I've also never been scared to move before.  Usually moving is exciting for me, because I love and crave change, and I hate routine and boredom.  (I know, I know..I'm the only person in the world who feels that way.  Everyone else hates and fights change.  Whatever.)

What's even more scary is that this move is going to seriously break the bank.  When you only own two suitcases and a carry-on, travel mostly by Greyhound, and live in hostels, you can move anywhere for about $200--usually less.  As I was considering all of my moving options today, I found out that you can ship a human being by bus from Wisconsin to Arizona for $187.  But if you want to ship a bicycle, a few small pieces of furniture, and a couple boxes of dishes, books, and clothing, it will set you back between $1,100 and $4,000.  Holy shit!

I just didn't think it would be so expensive, because everything I own can still fit in comfortably within a 300 square foot apartment.  But I was looking at different moving companies--U-Haul/U-Box, PODS, UPS Freight, rental cars/vans/SUVs, everything I could think of--and all estimates were in the multiple thousands. Every which way I look at it, this move is not only going to be expensive but wasteful.  I'll either have to pay more than the stuff is even worth to move it, which is a waste of money, or I'll either have to get rid of everything I have now and buy it all over again when I arrive in Arizona, which is a waste of money.  And in the second case, in 5-7 years when I have my PhD and am ready to find a job somewhere not in the desert, I'll have to make this same decision all over again--whether to move my stuff or not to move my stuff.

The financially responsble thing to do is to sell all my beautiful antique dishes and custom furniture and custom bicycle and return to living out of two suitcases and a carry-on for the next 5-7 years, and this makes me really, really sad.  It's not that I'm in love with my possessions themselves, but what they mean.  Because you know what happens when you own nothing?  When you live in some "furnished" former hotel crackhouse, or you live in an empty apartment?  It's embarassing to have people over.  It's embarassing because you have no furniture for them to sit on, no kitchen table at which to give them anything to eat, no dishes for them to eat off of, no DVD player with which to sit and watch a movie with them.  It's so embarassing that you don't invite anyone over at all, and you have to be all mysterious about why so as to avoid really awkward moments.  And your social life vaporizes.

I know this from experience.  And I'm dreading having to live that way again.

Unless, of course, I find some way to make an extra couple grand over the next four months.