I was supposed to run a half-marathon today.

But I didn't.  I didn't even show up to the race, because I haven't trained at all since mid-March!  So much for being "determined" to run the entire thing barefoot.

My excuse is not that "I didn't have time" to train consistently, because I totally did have time.  I just...didn't want to.  I HATE running.  I even hated it in my early 20s when I was a dedicated runner, when I had low self-esteem and hated my body and used frequent exercise as a way to punish it for not looking the way I wanted it to.

Thankfully, those masochistic tendencies have vanished, but the result of not enjoying self-flagellation anymore is that I almost never exercise, and I don't even feel guilty about it.  I had wanted to start running again just for health's sake, and I had thought that barefoot running (remember all those posts and pics of my dirty feet??) would alleviate the excruciating boredom of working out, but the novelty of it was fleeting.

For a short time this past winter, I had a running partner ("Stefan") to keep me on track.  We were going to do this minimalist shoe thing together...and then there was some romantic awkwardness, and I haven't seen or talked to him since.  I was running on my own for a while, and then once I found out I have to come up with an extra $3,000 before the end of July so I can move to Arizona, all superfluous concerns went completely out the window.  I stopped pretty much all of my hobbies--jewelry making, cooking, sewing, leisure reading...and running.  And then it occurred to me yesterday that Dude, the half-marathon is TOMORROW.

I mean, it's been written in my day planner for months, but my brain just didn't...care.  That's how much I hate running.  I see no benefit to it over doing something fun, like tennis or dancing, and I don't understand the popular claim that running "clears your mind" or gives you "alone time."  I can spend time alone clearing my head by lying on my bed staring at the ceiling.  For me, being in motion (and watching out for cars and environmental obstacles and other pedestrians) interferes with clear thinking.

I considered walking through this half-marathon, because I did pay a small registration fee and I did tell everyone and their grandmother that I was going to do it, and do it barefoot.  But the weather today is a joke.  There's a low-pressure system hanging over the state, so it's dark outside, it's been raining all day, it was snowing earlier, with 25mph wind gusts a wind chill temperature of 29 degrees.  I woke up this morning and took one look out my window at this perfect anti-running storm and laughed my ass off.

I know I wrote earlier about being afraid to move to the desert because of the world water shortage, but the longer that winter hangs on here, the more I am looking forward to trying out a consistently warm climate for a few years.  I'm looking forward to being able to ride my bike year-round instead of just in the summer.  To not having my shoes perpetually covered with snow, salt stains, and mud clods.  To being able to leave the house with damp hair in the morning and not having it freeze the instant I step outside.  And to not having to carry sunglasses, sunscreen, a winter coat, and an umbrella with me every single day because the spring and fall climate here is so damned bi-polar.

So anyway, today I am instead working on my wisdom tooth project.  This week I spent a full 9 hours measuring skulls and mandibles.  It was awesome!  Check out those rockin' sliding calipers: 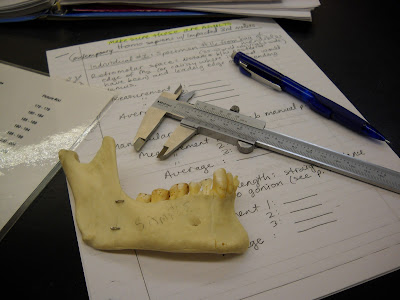 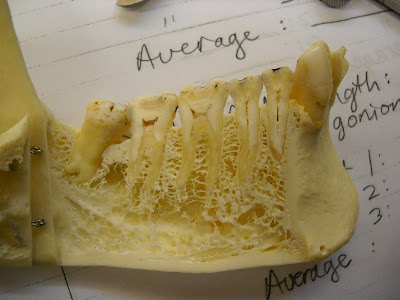 In the above specimen (a modern Homo sapiens), the pulp chamber of the third molar is enlarged nearly through to the tip.  This is called hypertaurodontism.  Partially enlarged pulp chambers (mesotaurodontism) is a condition regularly seen in Neandertals, but in modern humans, this is rare, and, according to Goldstein and Gottlieb (1973) is thought to be caused by failure of the epithelial diaphragm to form a bridge prior to dentin deposition.  Dentin, of course, is the calcified tissue directly underneath the enamel--essentially, the bony core of the tooth.
So there you have it, grasshoppers.  My priorities all spelled out: playing with bones, finding money to move to an institution that will allow me to play with more bones, and avoiding exercise.
Posted by An Extra Human at 13:04
Email ThisBlogThis!Share to TwitterShare to FacebookShare to Pinterest
Newer Post Older Post Home