Yesterday was my graduation ceremony.

It was a great day in many ways, but anticlimactic in others.

The night before, I had bought the snacks for my graduation party and dropped them off at my mom's, and then when I got home, looked at the watermelon sitting on my table and decided that it should be at the party, too.  But I don't own a car and because I would be getting rides from various people the next day, logistically it made the most sense to just take the watermelon with me to the graduation ceremony.

And take it I did: 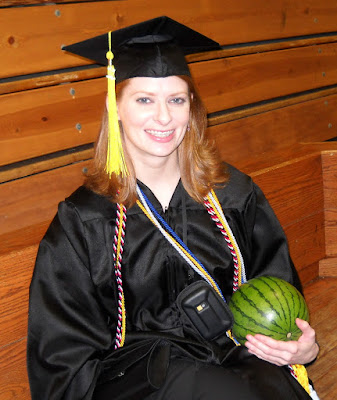 I walked into the gym with my friend Laura and waited for the ceremony to begin, and while other students were amused by my carry-on ("What is that, your snack?") apparently this innocent piece of fruit caused quite a stir among the college administrators.  "That looks ominous," one of them said.

"Oh, gosh no.  It's just for my graduation party.  I'm not going to cause any trouble," I assured him.  With all the cords that I was wearing--rewards for my skill in conforming to the academic environment and my mastery at playing The Game--did I really look like a trouble-maker?  Seriously.  You'd think I'd walked in with an anarchy tattoo and a carton of eggs or something.

Still, I was approached repeatedly by officials demanding I hand over the watermelon.  But I refused.

Then "Frank" tapped me on the shoulder.  Actually, I don't need quotations because that's his real name.  Before I say anything else, I just want it to be known that I hate that guy.  I first met him when I was a freshman and he was a staff member for a student program that I was in at that time, and I knew right away that I just hated him.  He has this blonde, sweaty, thin-lipped, blank-stare, overgrown Macaulay Culkin thing going on, and he spits out these condescending, trite phrases, and you just can't help but fantasize about taking a fly swatter to his face.  He doesn't remember anything that you tell him (for example, he sent me an email a month or two ago asking if I had post-graduation plans, and when I told him I was moving away to go to grad school, he replied by saying that I should attend a local job fair).  After freshman year, I didn't run into Frank that often, but every time I did, he'd say something that would just annoy the shit out of me.

So he was standing there, repeating like a robot that I couldn't have this watermelon, and I kept asking why, and he just kept blinking and staring at me, like..."You just can't have it."

"Because you can't have it."

Like all the other officials who had tried to confiscate my melon, he offered to hold onto it for me, and I explained that there would be no way for me to find him in the post-ceremony chaos, so giving it to him would be the same as throwing it away.  Besides, I didn't want his Uriah Heep-ish hands all over it.

"Well, the people running this don't want you to have it," he said, as if that were a reasonable and sufficient explanation.

At that point I was so sick of looking at him that I just dropped the fruit in the direction of his hands and turned away.  Of all people, why did it have to be him?  Why did it have to be one of the staff members on campus that I dislike the most and actively avoid?  But of course it was Frank.  'Cause he would do that.  He would be a pest at my graduation, because he pisses me off every single time I see him.  How could I have expected any other course of events?

Anyway, it's been a really long time since I've attended any kind of mass ceremony, and I always forget how oppressive and humor-free they are, even ones at institutions that pride themselves on encouraging students to think independently and creatively.  Why do graduations have to be so serious?  And bland?  In religious settings, the seriousness signifies a sacred, quiet, reverent atmosphere, but that atmosphere is not possible in a gymnasium full of hundreds and hundreds of people who are whispering to their friends and not even paying attention.  And what purpose does the blandness serve, except to spur friends and family members to complain that graduations are unbearably long and boring?

Another thing that bothers me about these kinds of ceremonies is that they're essentially popularity contests.  I always feel bad when a name is called and there's little or no cheering, especially when that name follows one for which the parents go crazy with whooping and hollering and blowing whistles and air horns.  I don't know if there was any cheering for me when I was onstage, since I was too focused on walking in the right direction and taking a flattering picture, but when some of the other students walked across the stage as their names were called, there was almost a dead silence.

I'm glad there are no yearbooks in college.

Anyway, when I shook the chancellor's hand, I told him I wanted my watermelon back. 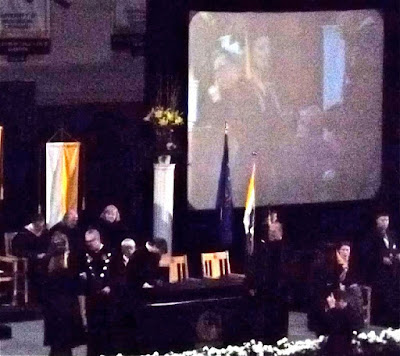 He didn't say anything.

At the reception, I stopped to visit with the professors from my department: 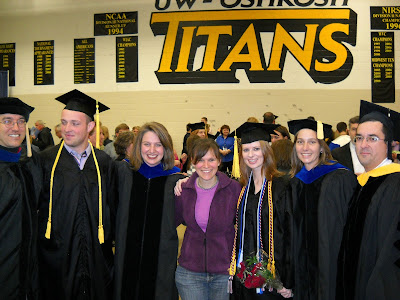 In the purple fleece is my good friend Jen.  She and her mom were sweet enough to come, but they had other obligations to fulfill that day, so before we said our goodbyes we got a few friendly photos: 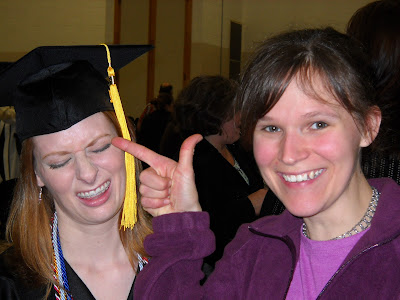 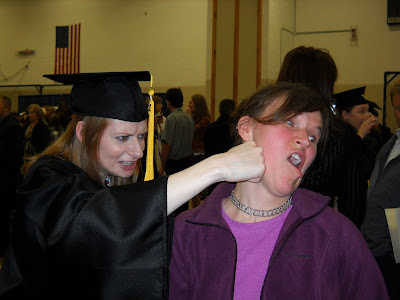 Then I went to my mom's, watermelon-free, to meet with my family for snack time. 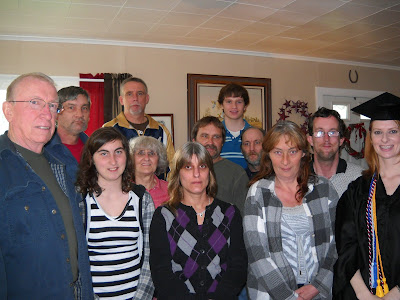 I was really surprised that they not only came to my graduation and to this little after-party, but that they brought me balloons and flowers and cards and were being nice to me.  And my mom even made a pan of brownie-type cake things!  I believe that is the first cake she has ever made, because we don't really celebrate events like birthdays or anniversaries or graduations in my family.  It was an interesting afternoon, because I had never seen them behave in such a festive manner. 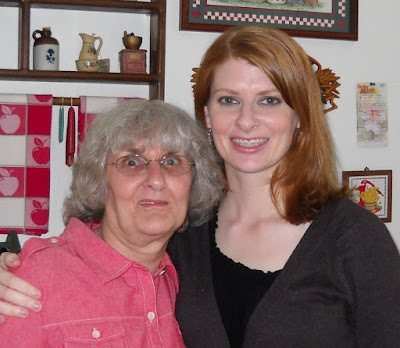 My mother: the source of my German schnoz.
My friends Bill and Rene also stopped by, which was so sweet of them: 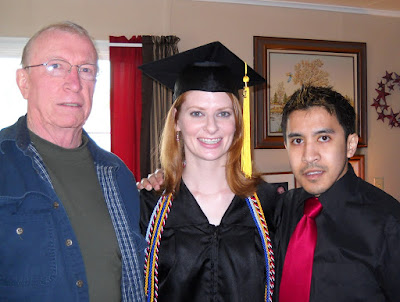 Then I went home and took a really, really long nap, 'cause I was fucking bushed from finals this past week.

And there you have it.  Commencement has come and gone, but I don't feel any different.  I thought I would feel a huge sense of relief, but I don't.  I still have SO much to worry about.  In fact, as each day goes by, I get more and more tense about this move to Arizona.  It's different from the other times I've moved across the country because now I have so much to lose if things go wrong, and I'm not talking about losing furniture or suitcases.  I'm talking about my future.
Posted by An Extra Human at 02:28
Email ThisBlogThis!Share to TwitterShare to FacebookShare to Pinterest
Newer Post Older Post Home