I haven't owned a working TV for almost 11 years.

When I was a kid, the TV in our house was NEVER off, and my mom never monitored what I was watching.  So I pretty much wasted my entire childhood in front of the television, filling my mind with all sorts of garbage you can't even imagine.

By the time I was 18 and moving out, I recognized that television was generally a bad thing, so I just never bought a TV, and have been TV-free ever since.  I've never actually seen American Idol, or Survivor, or any show that has aired since the summer of 2000.  I only know these things exist because my coworkers talk about them constantly.

But when I was young and did watch TV, I was a huge fan of anything science-related, like the Weather Channel (used to watch that for literally hours) and crime documentaries like American Justice and Cold Case Files.

Recently I came across the DVD set of Cold Case Files: The Most Infamous Cases at my local library.  "Whoa!  I used to love this show!" I said, rushing to the checkout.  So there I was, talking to myself in the library, thinking how awesome it would be to see this show now that I'm a little more educated about criminal law, forensic science, and human anatomy.  And I take this set home and, over the next 3 days, watch all 10 episodes on my mini DVD player. 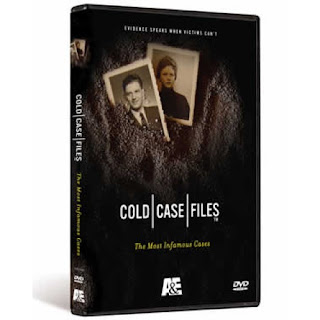 Most of the featured cases were midly interesting, but a couple of them really upset me.  Like the case of Gary Ridgway, aka "The Green River Killer," who told an investigator that once, when he went back to visit a victim's corpse, he had to "move the maggots out of the way" to penetrate it sexually.  In another case, Maury Travis took his female victims into his basement and videotaped himself torturing and killing them.  Like, he actually taped himself taking the lives of other human beings and announced things into the camera like, "This is Kill #____.  It was nice."

I had to stop the DVD at that point and turn away, my stomach churning.  Human beings are so fucking disgusting, I thought, wiping away the tears streaming down my face.  If human nature had a physical form, I imagine it would look something like a slimy mass of black caviar.  And these muderers would be filled with it.  I couldn't stop thinking about the victims--in these cases, dozens upon dozens of women--what they were thinking and feeling as their lives were being taken for no other reason than to entertain their killers.  The only other species that I know of that hunts down and murders adults of its own kind is Pan troglodytes--the common chimp.  So perhaps the murderer thing is a trait inherited from our last common ancestor.

I don't know how I used to watch this shit as a kid and not feel anything.  That was probably before my conscience was fully developed.  Blood, dead bodies, shootings, whatever; none of it bothered me or gave me nightmares.  And as I grew up, I always thought it was important to keep one's head out of the sand and face the reality of the harsh, cold, ugly world we live in.  In fact, I actively looked down on people who avoided this reality.  It's no surprise, then, that I was consistently drawn to things that were a little more edgy and weird, and wasn't the kind of girl who collected teddy bears or listened to Celine Dion.

For the most part, I'm still the same girl (er...woman), but I don't think I'll be watching any more Cold Case Files, or allowing a television into my home anytime soon.  I already know that evil exists, so do I really need to spritz it on myself like perfume?  Ingest it like some tonic?  Roll around in it like a pig in mud?

I never thought I'd be one of those people who willfully avoids certain parts of reality, but here I am, getting soft in my old age.  Pretty soon I'll be one of those old ladies who gets mad when people cuss and who coos over greeting cards with dewy-eyed kittens on them.