My Quickie at ASU

Last Friday I flew from Wisconsin to Arizona and back, all within 24 hours.

I was awake for 39 hours straight.  Not my personal record, but close.

I badly wanted to visit ASU before the first day of school, but finding a time to go required maneuvering around my advisor's schedule, my work schedule, and the numerous blackout dates and limited flight schedules of my consolation plane ticket from AirTran.  So the only possibility of visiting ASU was within a one-day shot.  Not ideal, but better than nothing.  After a flurry of emails and phone calls, making reservations and setting up meetings, I was able to settle on the following schedule for May 20:

Grueling for sure, but I was just so glad that all three of my flights departed AND arrived on time.  I almost couldn't believe it.  That, like, never happens.  And I had been so nervous that they would all be delayed for some reason and I wouldn't make it to work on time on Saturday, but everything worked out fine, scheduling-wise.  Shocking, I tell you.

Plus, I managed to snap a few pictures of the area around ASU.  Here is Mill Avenue in downtown Tempe, the semi-equivalent of Madison's State Street: 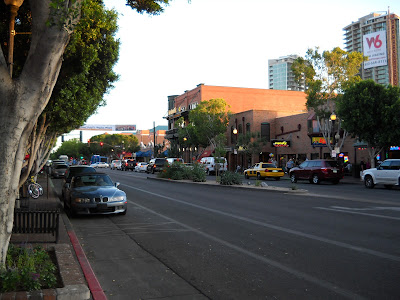 And "A Mountain," home to a huge concrete 'A' that gets painted different colors for different occasions.  Apparently it had been painted red, white, and blue when bin Laden was assassinated 2 1/2 weeks earlier, but has since returned to its standard gold: 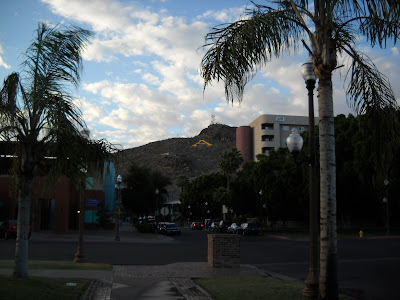 At the train/bus station were these cute little aloes all in a row that just charmed my socks off.  Don't you just adore succulents?? 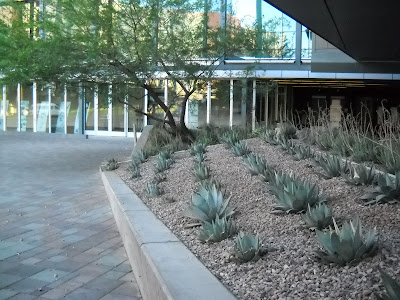 But as soon as I clicked the button on my camera I was immediately accosted by a security officer who informed me that no pictures were allowed anywhere near transportation stops because of bin Laden's death.  Because, you know, a tourist admiring the landscaping is definitely a threat to national security.  I have to say, being treated liked a criminal when I am not one inspires within me extreme negative feelings towards security personnel.  I remember once upon a time when travel was fun.  Unfortunately, those days are long gone. 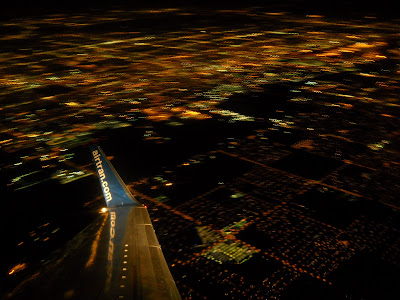 Phoenix on the way out.
As for the afternoon I actually spent on campus meeting with these professors and students, I was really grateful that they were able and willing to meet me at all, considering ASU's semester ended weeks ago.  Unfortunately, I'm not sure I gave them the best impression.  I was so nervous and afraid.  My hands were cold and my shoulders were tense and I was saying all kinds of weird shit.  I wasn't just nervous about this tight schedule I was desperately hoping would work out, but because the anthropology professors at ASU are some of the biggest names in the field (which is, of course, one of the reasons I applied there).  They're all so smart and discerning and I wondered what the hell I was doing there, daring to knock on their doors.  I got the distinct feeling of being, as Robin Williams would say, a hemophiliac in a razor factory.  And after meeting with them I was more mystified than ever as to why I was not only accepted into the program but also given a substantial funding package.  A clerical error, perhaps?  A misunderstanding?  "Maybe they see a lot of potential," a coworker offered.

I don't know.  But the important thing is that I now know of a place close to campus that serves baklava! 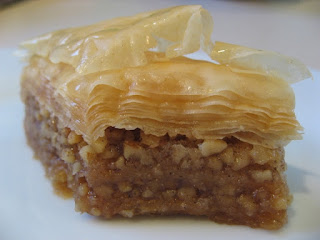