My first day of grad school--and my first dust storm

As an undergrad, if you ask what grad school is like, you're told that it's as hard as goat balls and it's going to Kick. Your. Ass.

You're told that the professors will be super demanding, the other students will be so much smarter than you, the courses will be so hard, the readings so advanced and numerous, and the research so tedious that you will wish you had never been born.  But in the end, you're told, it will be worth it.  Kind of like climbing Mt. Everest, or as one of my professors said, walking a tightrope blindfolded.

So, after having spent the last 2 1/2 years being told that grad school was like military basic training but worse, and after what happened as reported in my last post, I was really nervous about my first day of school, which was last Thursday.  I had Geoarchaeology at 9am, followed by Primate Paleobiology at noon.

Nothing outrageous or embarrassing happened at all.

Everything was totally normal.

In Geoarch, the professor reviewed the syllabus and then let us go.  In PPB, there was a short intro followed by a very interesting lecture about the major Greek philosophies that have had significant effects on scientific (or anti-scientific) thought throughout history.  I even asked the professor for clarification on a certain point, and this went over without incident.  And then class was done and everyone went home!

I couldn't believe it.

I know this was only one day, and that Everest climbers probably feel fine after their first day too, all while excruciating days filled with horrible incidents lie in wait. 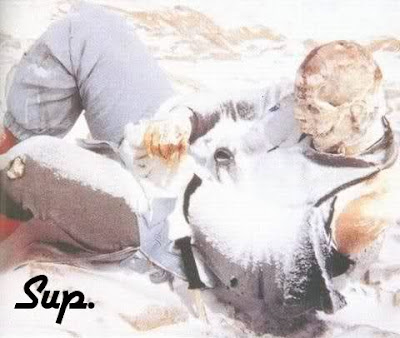 But on this day, nothing exciting at all happened.  I got to school early with no problem, the weather was great, everyone was nice, I was prepared, I didn't forget my clothes, as I so often do in my nightmares.  And as I got on the train to leave campus, I thought, Man, I don't have a single funny thing to put on my blog.

But then I was on my way to the DMV to switch my drivers license over.  It took me three hours and four buses to get there because Google Maps gave me the wrong address, and this DMV is located in south Phoenix, which is the hardscrabble part of town.  You know, I had been wondering why most of the street and business signs here were in English, and wondering where the barrios were.  Then I went to southern Phoenix and found them.

I had no problem there, either.  All went smoothly at the DMV too, although my new card has an expiration date of 2047, when I'm 65!  The DMV website, however, says you're supposed to update your photo every 12 years, so I don't know why it doesn't just expire at that time.

Anyway, on my way home, someone pointed out a rapidly-swelling, large brown cloud on the horizon. 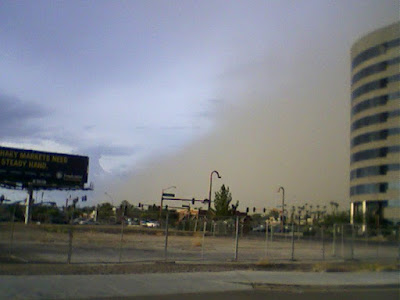 And this was my first excitement of the day.  I took the above picture just as the train dropped me off at the Park-and-Ride where I park my bicycle, so I was still a couple miles from home.  I wasn't sure what to do, like what is the customary reaction to a dust storm.  Was I supposed to go inside a gas station or something and wait it out?  Or just ignore it and go about my business?  Or run away screaming with my eyes bulging and my arms flailing over my head?

I stood for a few minutes watching everyone else to see what they were doing.  None of the cars on the street pulled over, and no one was running away screaming (although I did see a few clutching their babies and hurrying to their cars).  So I got on my bike and figured I'd play it by ear.  Within those few minutes the storm had engulfed the city.  And by default, me. 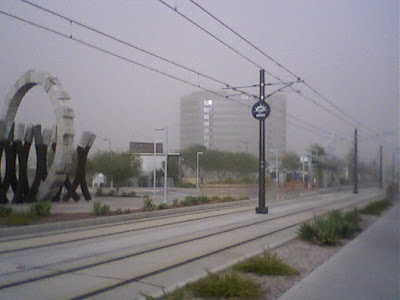 Even the sun was blocked out for a while.  And if some dust can block out the desert sun in August, that's saying something. 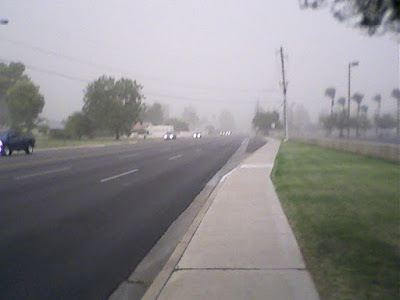 It was very windy.  There was all kinds of debris blowing around...plastic bags sailing through the air, dead palm fronds tumbling through peoples' yards, and huge pieces of palm bark clapping across the road.  I actually found the chaos a bit comical.  That is, until my contacts started to feel gritty and waves of sand started to whip across my skin at high speeds.  Owie!
So I was cocooned in a thin layer of dust when I walked in my door.  And I would have loved to get some good quality pictures, especially of the sun retreating behind this hazy veil, but all I had on me was my craptastic phone, and by the time I got home, the storm was starting to clear.
Now, you might be asking, "What causes these dust storms?"
And I would tell you that first, a thunderstorm forms out in the desert, and then it suddenly dumps all its rain onto the dusty ground.  The dust gets puffed out into a big wave, kind of like a tsunami in the air.  The dust wave then rushes out ahead of the thunderstorm and rolls through a city like Phoenix.  By the time the thunderstorm catches up, the dust has mostly settled and the thunderstorm has already dropped most of its rain, or, because the desert is so hot and dry, the rain has evaporated before it hits the ground.  Thus, the dust storm itself does not create mud, and the thunderstorm that follows it has usually lost most of its juice by the time it arrives.
A haboob is a larger-than-usual, once-in-a-lifetime dust storm.  Very few dust storms are haboobs.  But because it's a funny word, the media likes it and my beautiful Aunt Holly, who has lived here for a long time, tells me everyone on TV is calling all dust storms haboobs now.
So that was my first day of school.  I still LOVE, LOVE, LOVE the desert, although I'm not sure I'm a fan of Phoenix simply because it is so conservative, but I hear other towns in AZ are hippie enough for my taste.  And I really like ASU so far.  It is just massive and has so many resources available for its students.  If you go to the library and need help, you don't just go to any librarian, you go to the anthropology librarian!  Wow!  And you can rent a Zipcar, or go to the campus farmer's market on Tuesdays, or to the delicious gourmet restaurant that serves local, organic food at reasonable prices--right in the Union!
Most importantly, though, I am really excited to sink my teeth into these classes (I also have a Readings and Conference course with my advisor and a required "Professionalism" seminar) and get going on my research.  After a very weird, stressful summer, it feels SO good to be back to my normal routine of thinking deep thoughts and pondering the nature of existence.  I don't feel like myself if I'm not doing that.  I love learning.  I love taking notes.  I love designing research projects--and I get to do it TWICE this semester.  I know, right?  Gird your loins!
Posted by An Extra Human at 17:59
Email ThisBlogThis!Share to TwitterShare to FacebookShare to Pinterest
Newer Post Older Post Home