Stealing juice at the strip mall

Yesterday I went to a 5-hour orientation for grad students who are new to ASU's School of Human Evolution and Social Change (aka the Anthropology Department), and during lunch at this orientation, while I had sandwich bread and lettuce all stuck to my braces, I met my student mentor and a couple of the other new grad students, and their mentors as well.  That night they were getting together to go see the new Planet of the Apes movie, which is kind of a joke for anthro students, because we study apes so much and know so much about them--chimpanzees in particular.  So they're like all, "Hey, you wanna come with us?  The movie starts at 8:00" and I'm like, "Sure."  Because what better way is there for scientists-in-training to bond than to point out inaccurate portrayals of Pan troglodytes in the Planet of the Apes franchise? 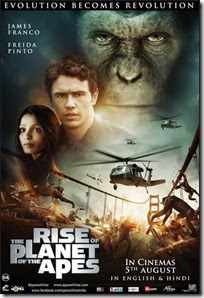 Now, my apartment is kind of far away from school.  Well, probably like 20 minutes by car, but by bus or train, just over an hour.  So to get to this movie by 8, I leave my house at 6:15 and arrive at the train station closest to the theater at 7:30.  According to my city map, the theater is about 6 blocks away.  I should make perfect time, I thought.

You can see where this is going already, can't you?

So I start walking.

And I start sweating.  'Cause even though it's nighttime it's still like 99 degrees and the longest I've walked since I moved here.  And I'd never been to that part of Tempe before, so I took a wrong turn and ended up taking the extra-extra-long way.  And this metro area is so sprawled out that a block is like a fucking mile, so city maps are really deceiving.  At 7:55 and I called one of the students to tell them I'd be late and to go ahead and get their seats without me.  And I was trying to take shortcuts, walking through people's landscaping and through abandoned dirt lots and fields of weeds, and fucking jumping fences and stone walls in the dark and shit.  It was such a long way, and so hot and so dusty, I felt like I was crossing the border.  Man, I feel for those people, let me tell you what.

By the time I got to the theater (which was in a strip mall dressed up to look like a real downtown), bought my ticket ($9.50!), and found a seat by my group, it was almost 8:30.  Which was okay, I guess, because truthfully, I'm not a sci-fi person AT ALL.  I dunno...am I the only one who looks at computer-generated ape lips and thinks, Hmm, I have to go grocery shopping tomorrow.  I can't forget Craisins, 'cause I love Craisins.  And cheese, too.  I am completely out of cheese.  I haven't seen any of the other Planet of the Apes movies, and if they are just as silly and ridiculous as this new one, then I will make it a point to avoid them.  But the intention of seeing this with a group of anthro students was to giggle at the silliness of it all, right?  And laughing together is a bonding behavior for humans.

Afterwards we went to a nearby bar for drinks.  So I had my orange-and-cranberry juice and was having an interesting conversation with one of the archaeology students, but it was already 10:30 and the very last train would be passing through in a half hour, and I still had all that walking and jumping fences to do to get back to the train station.  Except at that point I'd probably have to fucking jog.  In my dress sandals.  So I started to worry, and got really distracted, and was trying to gracefully cut off the conversation and not look like the weirdo who leaves early after arriving late.

"Okay, bye! Thanks for inviting me, uh-huh, see you soon."

Dude, I seriously have to get out of here!

So I hurried out, and halfway out of the strip-mall-disguised-as-a-downtown, one of the students caught up to me and offered a ride to the train station.  And I said yes, even though I hate accepting rides from people I don't know that well.  I always get the very distinct sense that I'm being pitied for not having a car, and I HATE that.  I know people are "just trying to be nice" and "just trying to help," but the reason they offer to help is because they believe you are struggling and incapable of completing the task yourself.  That's not necessarily what was going on last night, but the fact is that one of the students (apparently at the urging of one of the other students) interrupted his fine evening with his friends to give the new chick with braces a ride to the train station.  And this inspired within me a feeling of indebtedness.  Oh great, now I owe this guy gas money!

He insisted I didn't owe him anything, so I tried to forget all about it, and I caught my train, and gave the last of my spare change to a beligerent alcoholic while on that train, and went home and went to bed.

Today, however, I realized that I ran out of that bar last night without paying for my drink.

Did I really arrive a half hour late, all dusty and sweaty, then leave almost right away after, then interrupt someone else's good time because of this whole train station business, and then run out without paying so that some other poor soul was forced to pick up my tab?  When I was sober the entire fucking time?

These are the kinds of first impressions that I make, people.

So today I had to endure the humiliation of finding out who picked up my tab, and of contacting that person with profuse apologies.

I'd say that making friends in grad school is off to a great start.
Posted by An Extra Human at 16:23
Email ThisBlogThis!Share to TwitterShare to FacebookShare to Pinterest
Newer Post Older Post Home