What is occurring, hammies?

Yesterday was the last day of my first semester in grad school.  I should have been happy, but I was so exhausted that I just felt like a yucky, grumpy, blobby...blob.

That's because the night before, I'd stayed up quite late to finish a research proposal for my geoarchaeology class (that's geology + archaeology, just so you know).  I've taken geology before, and thought it was fantastic, but I've never taken a single archaeology class in my entire life.  And don't care to, either.  It should be an interesting subject.  Millions of people around the world think so.  But damn, just typing that word actually makes me yawn.  And geoarchaeology is basically the definition of boring.  It's mostly about the properties and chemistries of soils that make bones and artifacts preserve well or not preserve well.  Which is important knowledge, of course, but, like archaeology, it just...doesn't get my motor running at all.

So for this geoarch class, in place of a final exam we had to write a research proposal, like the type you'd submit to a foundation to apply for a grant.  We had to pick a geoarch topic, give a brief literature review and original hypothesis, explain in detail what kind of experiment we'd run to test our hypothesis, and explain what such a project would contribute to the field.  Okay.  Not a problem.

The snag was that I don't know jack shit about archaeology--and that I didn't retain the info we learned about soil chemistry enough to design a competent project proposal about it.  Instead, I took a subject that interests me greatly--the evolution of warfare--and read about certain Bronze Age excavation sites which may or may not be evidence of the earliest organized conflict.  I noticed that for some of these sites, the percentage of skeletons that displayed bone lesions consistent with hand-to-hand combat was very low (for instance, 6% or 9%).  Whereas if you find a buried army of defeated warriors, you'd expect a high percentage of their skeletons to have such bone lesions, since many Bronze Age weapons were designed to do some serious skeletal damage. 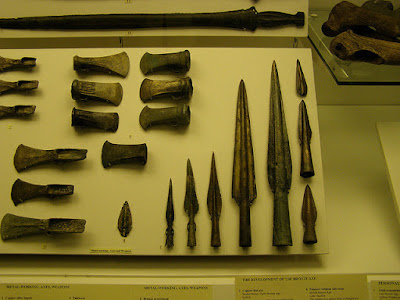 Ceremonial weapons my ass.  These people were not fucking around.
So, to help determine whether these sites were really battle sites, I wanted to test whether the existing lesions on these few specimens could have theoretically occurred immediately postmortem.  For example, say someone drowned and died, and just moments after their heart stopped, they hit their head on a rock, and their skull got a dent (a lesion) on it.  If we found their skeleton buried in the riverbed years later, we might think they were clocked in the head and then tossed in the water (and we might go looking for a suspect).  And yes, forensic anthropologists have ways to analyze these types of wounds and tell the difference, but I was running out of time and ideas and needed some sort of hypothesis.

The next step was to write up the details of how I was going to test this.  Now, there is a thing called "experimental archaeology," where researchers bury various types of objects and bones and dead animals to observe the process of preservation under different environments. I decided to go that route, so for the "Methods" section of my project proposal, I wrote:


"The reconstruction experiment will consist of an outdoor laboratory on a one-half km2 plot of private land. This plot has a low-velocity, 1m-deep stream running through it, into which rocks of various sizes will be placed at random, and a metal screen will be placed downstream to catch floating specimens. A waterproof video camera will be anchored from the vantage point of the rocks to record impacts of the specimens. Thirty meters away from the stream, in sandy-clay soil with a pH of 6.8, a mass grave will be dug.

"Thirty-five whole pig heads (both male and female) will be obtained from VonHanson’s Meats in Chandler, Arizona, USA. These heads will substitute for human heads. The first group of 10 heads will be marked with yellow plastic tags pierced through their ears and split into 2 groups of 5 heads each. Five heads will be dropped from a height of 1.5m into the stream over the rocks, and the other 5 will be tossed directly into the mass grave.

"The second group of 10 heads will be marked with red plastic tags pierced through their ears and placed on a wooden crate 1m tall and shot with a bronze replica arrowhead into various points on the skull, from a distance of 3m, and then split into 2 groups of 5 heads each. Five will be dumped into the water, upstream of the rocks, and 5 will be dumped into the mass grave.

"The third group of 10 heads will be marked with green plastic tags pierced through their ears and placed on the same 1m-tall crate. They will then be struck on the anterior portion of the cranium with a wooden club (modeled after the Tollense site club) made of ash wood (Franxinus excelsior), 0.73m long and shaped like a baseball bat. Five will be dumped into the stream upstream of the rocks and 5 will be dumped into the mass grave. All striking and dumping of the heads will occur on the same day the heads are obtained from VonHanson’s, to ensure they resemble fresh human victims as much as possible.

"The mass grave will then be filled and left for one week to observe if the pressure of the overlaying soil will damage either the whole heads or the “wartime” heads. The 5 remaining heads will be neither buried in the mass grave nor deposited in the replica fluvial system, but simply cleaned with solvent, marked, and photographed with a 35mm digital Nikon camera to keep as a control group. The heads collected by the screen at the end of the stream will be collected on the same day they were deposited, since this test is to simulate cranial lesions formed from riverbed rocks. They will then be cleaned with solvent, retagged, examined for lesions, and photographed. The video recording will also be retrieved and observed. After one week the mass grave heads will be exhumed, carefully cleaned with solvent, retagged, examined for lesions, and photographed. Finally, all results will be compared to lesions documented in the Tollense, Argara, Trøndelag, and Epheseus (Gladiator) studies, as well as to specimens documented in White and Folkens (1999, 2005).

"Similar reconstructive methods were employed by Nicholson (1996), O’Flaherty (2007), and Pante and Blumenschine (2010). Reconstruction experiments on actual tissue permits body traumas to be observed as they occur, and for the effects to be examined directly. This study will provide data to assist with identifying bone lesions incurred during fresh corpse disposal and those incurred during a massacre or battle."

Well, it sounded like a nice methodology when I was writing it at 4am.  But when I proofread it later that morning, it just sounded sick.  And that made me laugh.  And then I thought of my professor reading it, and how this paper was worth 25% of our grade, and that made me laugh harder.  But it was too late to start over, so I just handed it in.

I figure if I get a bad grade, well, at least I had a blast writing it.  And that's what's important.  Besides, I'm getting used to earning bad grades now.  Sure, once upon a time I was an 'A' student, but that was as an undergrad.  Pshaw!  That was back when I liked school and loved most all of my classes.  That was back when I was riding with training wheels and bowling with bumpers in the gutters.

Now I am a tiny gastropod being swept against a jagged coast in a great hurricane.

Now I am writing about taking baseball bats to slaughtered pigs' heads and throwing them in rocky streams. 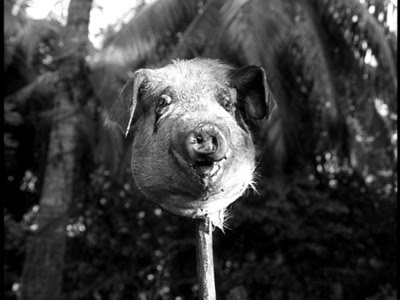