Jeez Louise...I can't believe there is only one more week of school left.  What the...?

I also can't believe my genetics presentation went okay today.  At the beginning of the semester I was really struggling with that class, because I don't have a genetics background at all, but as the months have passed I've really come to enjoy the subject.  It's very useful stuff to know.

Anyhow, it's one of those classes that has some undergrads and some grad students in it, and we 6 grad students had to do secondary research projects and make presentations about them this week.  The topic was flexible; we could research anything as long as it had some kind of human genetics component.  At first I thought I'd continue with my wisdom tooth paper and look at the genetics of prognathism, but that was getting a little dull, so I switched my topic and picked the most ridiculous thing I could think of.

So my project was about hominine (chimp, bonobo, gorilla, and human) mating systems and the homologous genes (SEMG1, SEMG2, and TGM4) between these species that code for cross-linking proteins (semenogelin 1 and semenogelin 2) and enzymes (hTGP) that coagulate to form copulatory plugs, which vary in softness or hardness between species.  Chimps and bonobos have firm copulatory plugs, whereas gorillas have none at all, and humans apparently have a barely-there, semisoft one, "like a copulatory booger," I explained to the class.  This was one of my slides: 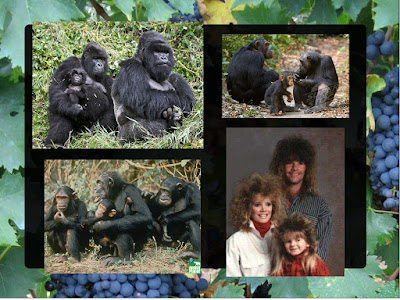