'Member when I used to post braces updates?  And now I haven't in a long time and you were wondering what is up with my braces, like when the hell are they coming off already?  And I'm here to tell you...they aren't.

I got my braces put on in Wisconsin and the orthodontist I had there was just awesome as could be.  Both he and his staff were super nice and knowledgeable and I felt like I was in good hands.  I assumed I'd be finishing my treatment with that practice, but then I got accepted to grad school and I couldn't turn that down, so I moved here to Phoenix and transferred to this other ortho, whom I shall refer to as Dr. Blockhead, who was "highly, highly recommended" to me.

First of all, his staff is insufferable.  The receptionist can be really persnickety, the financing lady tries way too hard to be grand and put on some Mid-Atlantic accent, and the ladies who change patients' archwires and elastics talk down to me like I'm some idiot little kid.  There's no adult treatment area, so every time I go there I'm surrounded by stuffed animals and cartoons and glittery Spongebob stickers and gagging/crying 10-year-olds.  This practice doesn't give out regular bags of rubber bands, but ones that have pictures of teddy bears and other cartoon animals on them, and when the staff ask me if I need more rubber bands, they say (in a sing-song voice), "Are you still wearing teddy bears or are you wearing rams/unicorns/bunny rabbits now?"

No, I'm wearing the Gatling guns.

One time I walked in and was greeted by one of the staffers who was standing at a sink, brushing her teeth.  So while she was foaming at the mouth, she's smiling and all, "Wuh be wish you in a shecond!"  No, she couldn't have done that in the bathroom or anything.  She had to do it in full view, in the middle of the afternoon, when the place was packed.  Now, I'm all for oral hygiene, but yuck!

Then there's this older blond woman, an orthodontic assistant or whatever, who really gives me the willies.  I can't stand her.  The first time she changed my archwires, she steadied her hands by resting her wrists on my eyeballs.  Meaning, I could actually feel my eyeballs getting squished down into their sockets. 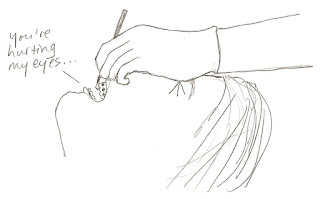 "Oww," I said, pushing her hands away.

And what does she do next but do it again!  So I kept my own hands cupped over my eyes for protection from this lunatic.  How does anyone reach a point in life where they are completely unaware of grinding their joints into someone else's eye sockets?  WTF.

And then the next time I went there, this same woman was in charge of changing my elastics again, and I was prepped and ready to bitch her out if she tried such funny business with my eyes again.  Well, she didn't do that, but instead she practically gave me a face massage, resting her open hands on my face, rubbing my face up and down, cupping my jaws, stroking my cheeks.  It was fucking disgusting and I felt very violated.  Not to mention pissed off  'cause she was messing up my makeup in the process.  And just when I was about to yell at her for that, she stopped.

"So how did the wire from last time work out?" she asked.

"Not good at all," I grumbled, wishing she was dead.  "It made one of my central incisors lower than the other, and now when I smile, my entire face looks crooked."

I bared my teeth in a menacing fashion.  She stared at them blankly, not seeing the very obvious difference in length between my two front teeth, not seeing that the wire between them is clearly lopsided.  "How do you not see that?" I said, wondering why a blind person would be hired as an orthodontist's assistant.  She then walked around to the other side of the chair to inspect my teeth.  And THEN, she put her elbows on my arm rests to support her great weight, and practically lay on top of me, then leaned in close like she was going in for a big smooch. 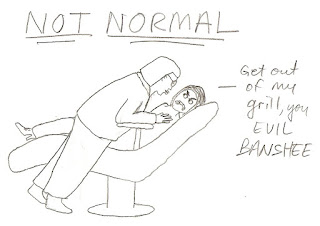 Thank goodness she didn't do that, but instead she just kept staring at me with this stupid fucking look on her face.  Meanwhile, I'm having a panic attack and feeling like I'm about to be molested, and she's all, "I don't see what you're seeing."

"Nevermind!" I snapped, crossing my arms protectively and turning my body away.  "Forget I said anything!  I'll talk to the doctor about it!"  I was so upset I even pulled my knees up to my chest and sat in a fetal position.

And then Dr. Blockhead came over and did the exact same thing!!  Put his elbows on the arm rests and put me, the patient, in that same degrading position, made worse by the fact that he's a male and I'm a female, and he was all on top of me like that.  This time I wasn't having any of it, and I squirmed away and told him that position was making me uncomfortable.

Of all the dental-type people I've seen in my well-traveled life, I can safely say that none of their behavior is normal.  Normally, if a dentist/orthodontist needs to steady their hand during a procedure, they rest their pinky finger on your chin or something--they don't rub your face up and down or get all up in your eyes and shit.  Normally they aren't foaming at the mouth when you walk in.  And if they do have to lean in close, normally it's only their face and not their entire body.  And normally they never trap you in the chair with their arms like that.  I felt very threatened, cornered, and violated.  And I was pissed about that for several days afterward.

Then I recalled that I almost always feel upset for several days after each visit to Dr. Blockhead's office, and I've felt uneasy about that place ever since my very first visit.  Every single time I go there, they do something that makes me seriously question their competence.  I feel like I have to constantly be on guard to not only protect myself from gross violations of personal space, but also to make sure they're giving me the right wires and bands.  That blond woman almost gave me the wrong elastics once because she wasn't paying attention, but fortunately I caught it and said something.

And not only is Dr. Blockhead's staff super creepy and scary, but my teeth still look like crap.  When he said my braces could come off soon, I pointed out that my midline is still way off, my molars aren't coming together properly, my entire row of bottom teeth are slanted downward to the right, I still have an overbite, and one of my upper canines was hanging too low and looking like a fang.  And Dr. Blockhead replied that he can only do so much to fix the problems he "inherited" from my old ortho.  Then we squabbled over the fang issue for a while, with Dr. Blockhead arguing that fangs look good and that they are the proper way to align teeth.  And now he's saying that my jaw itself is thicker on one side and that's why my teeth will never line up right.

I might have believed him about that last point, except that:
I think he's making up excuses so that I'll accept these crappy results and he can move onto the next patient and make more money.  So I called another orthodontist in town and made an appointment to get a second opinion.  Even if they agree that I'm deformed and that my teeth will always be shitty and uncooperative, I still might transfer to them if their staff seems less creep-tastic than Dr. Blockhead's staff.  If they promise to never trap me in the chair or press their wrists into my eyeballs, I think it'll be worth the hassle of transferring.

Me and my first world problems.  I know.  And I think about how I spent nearly $6,000 on these braces because I had always been really self-conscious and insecure about my teeth, and now, after I've already spent the money and 20 months wearing braces, I might get confirmation that my teeth are unfixable.  Are you fucking kidding me?  What a waste!  I could have bought a car with that money and gotten a well-paying job.  I could have traveled to Machu Picchu, or gone on an African sight-seeing safari.  I could have fed or sponsored hundreds of starving orphans, or donated it to some environmental organization, or stashed it away in my Roth IRA, or done any number of more productive things with that money.

It irritates me that most people get their braces for free from Mummy and Daddy when they're little and never have to deal with these stupid problems.  It irritates me that parents aren't criticized for spending that money on Junior because it's for the children.  But if an adult puts the same money and care into themselves, it's "vanity."

"But virtue would not go far, if a little vanity walked not with it," as the Germans say.

So in happier news, I got a haircut.  Well, really I just got bangs and a trim, because my hair was getting to be this long, unruly, undulating, Medusa-like mass.  It was getting so long I was starting to look Mormon. 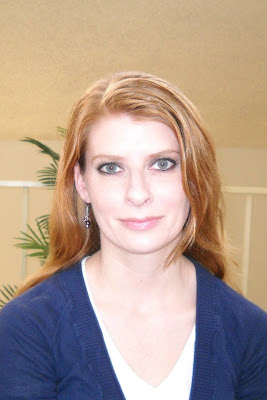 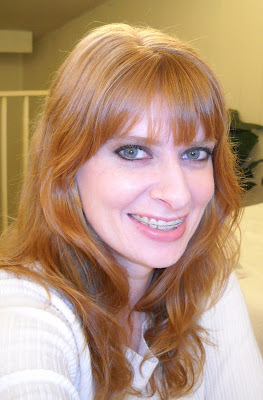 And how cute is a basic ponytail? 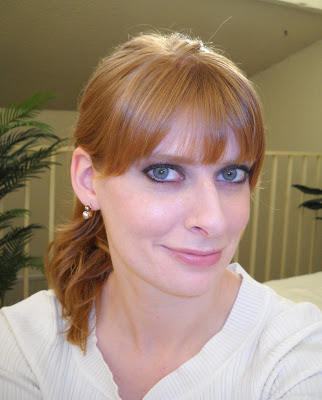 So gals, if you are bored with your hair, I highly recommend getting bangs, or "fringe" as the English say.  Bangs are fun, they're easy to style, they look good growing out if you do the whole sideswept thing, and they make for a good hair day even if the rest of your hair is being stupid.  And they make you look younger.  Which, in my case, may not be a good thing. 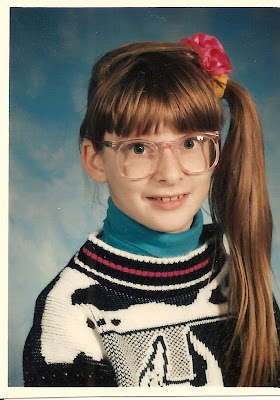 Unlike you, Cindy Crawford's Daughter. 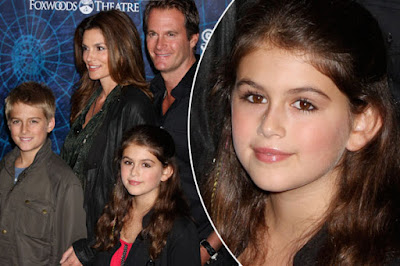