My best friend, Jennifo, has come and visited and is now gone.

We had a GREAT time.  We agreed that this was probably the best vacation we've ever taken together, and it was the first time we've ever hung out continuously for four straight days.

"Well, what if you get sick of me?" she replied.  "Actually, I was thinking of that earlier, that this trip is going to be Hope 24/7.  Like the only alone time I'm going to have on this trip is when I'm in the bathroom.  That'll be my only reprieve from you," she cracked.

I giggled.  And she giggled.  Because we're always doing that.  Hope and Jennifer--snickering and being ridiculous since 1999.  Well, technically we've been laughing since 1997, but that was before we were friends who hung out outside of school, and brought a bathtub chair inside our school and threw it down the hallway.  And stole a shopping cart and let it tumble down the side of a landfill.  And took a blow-up doll to homecoming. 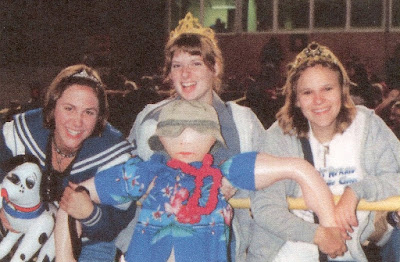 That's Jen on the right, me in the center...before we threw Mr. Stud into
the crowd for a little crowd surfing.
Anyway, back in 2007, after we'd each had a string of disappointing New Year's Eves spent with shitty dudes who didn't deserve us, we vowed to always spend New Year's Eve together and do something really fun, no matter what.  And the main thing we always try to do is get dolled up and go dancing--be it polka, swing, freestyle, can-can, or what have you.

This year for New Year's, Jen came to visit me here in Phoenix, which was kind of a big deal since she lives in Wisconsin and had never flown before.  But her first flight exerience went well because Air Tran introduced her to those little Biscoff cookie packs which are unbelievably delicious, and when I picked her up at the airport we screamed and hugged and then discussed how mind-blowing the Air Tran Biscoff cookies are.

On New Year's Eve night, there were a number of fancy events going on in Phoenix, so we went thrift-store shopping to get her a gown.  As for my formal wear situation, I already had a gown that I got for $15 at Goodwill three years ago, which fit me like a glove.  At least, I remember it fitting like a glove when I last wore it in 2008.  When I put it on though, it was uncomfortably snug around the gut and uncomfortably loose around the boobs.  So unfortunately I'm getting old and fat and my large pendulous bosoms are slowly deflating, which is kind of a pisser.  But I guess that means I get to go shopping for a different Goodwill gown next year.

Here's the gown that Jen found--a lovely seafoam-green specimen for $19: 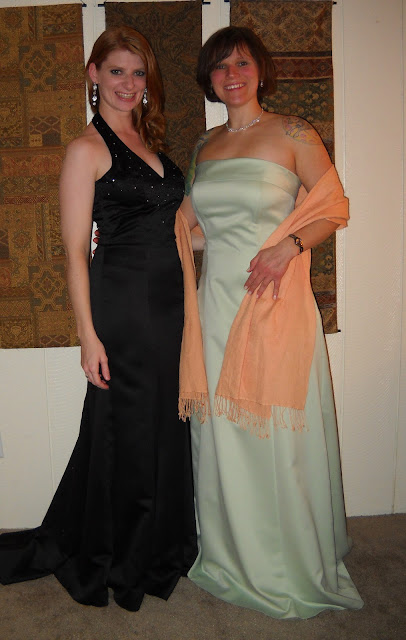 Here we are, not breathing and sucking in our 30-year-old guts, like hardcore.
And here we are making The Duckface: 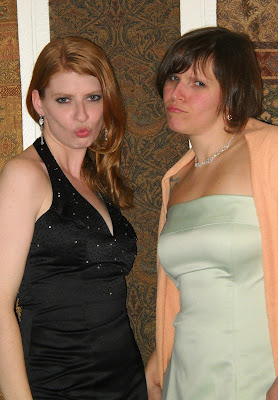 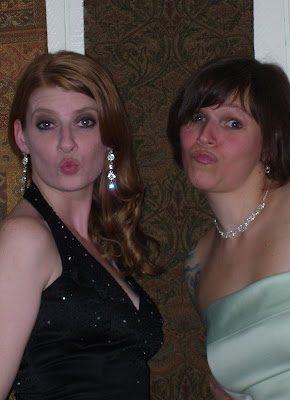 The first event on our agenda was a party at The Ritz-Carlton, described as having "live jazz music and dancing in the Lobby Lounge."  Not that either one of us are jazz aficionados, but we just wanted to be able to say we went to The Ritz.  We skipped the valet parking and went in and ordered our drinks, and when we sat down, I felt an unusually cool breeze across my chest, and realized that the clasp at the neck of my dress had come completely undone.  So there I was, in a very fancy bar, lounging on a beautiful leather couch, drinking a Shirley Temple, with my dress straps suddenly melting off me.  At the fucking Ritz-Cartlon.  Surrounded by rich old people.  On New Year's Eve.

Oh, and no one else besides us was dressed up.  Apparently rich people don't walk around in gowns and fur stoles all day.  One of the other major disappointments of my life.  *sigh*  And I guess they don't really dance.  Either because the band was playing some nondescript elevator music or because these patrons were too enchanted by my Disappearing Gown act.

So Jen and I, we didn't stay long.  Although we did have an interesting discussion about socioeconomic class in post-modern America on the way to the Blue Martini Lounge, which, according to the Arizona Republic events listing, was paying a "tribute to James Bond and [hosting] a black-tie soiree to ring in the New Year.  Get dolled up in shimmery gowns and sharp tuxes, and enjoy that martini in dazzling style."  How awesome does that sound?

Except that when we got there, we observed that the Blue Martini Lounge was not really a lounge but one of those meat-market dance clubs, packed wall-to-wall with hipsters bumping and grinding in miniskirts, dancing to music turned up so loud that you can't even hear yourself shout.  There was no "soiree," there were no tuxes, and once again, Jen and I were the only ones in gowns.  Ah, those poor Goodwill gowns.  This dance club was a madhouse, and everyone else there was so wasted that they kept stepping on our gowns and spilling their drinks on us.  I had no less than three drinks spilled on me, one of them by a bouncer who was on the middle of kicking someone else out of the club.  We danced for a little while, then headed home.

The next day we drove down to the Sonoran Desert National Monument and hiked all day, and it was incredible.  Now this...this was a good time.  It was the perfect day. 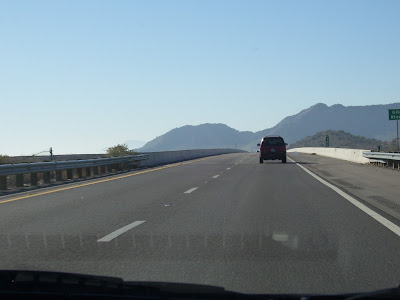 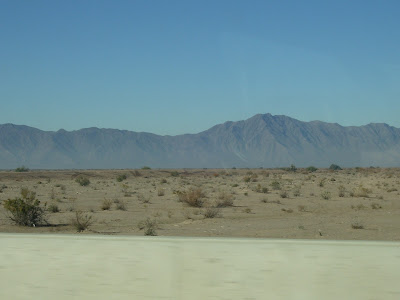 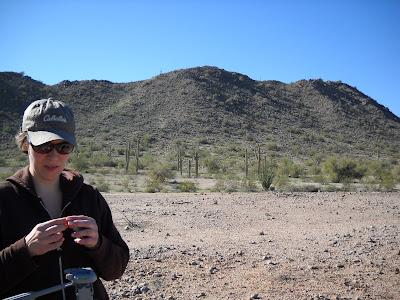 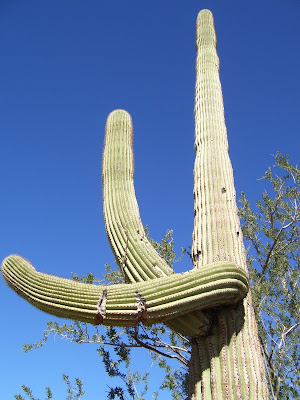 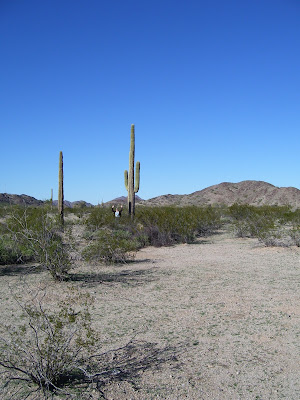 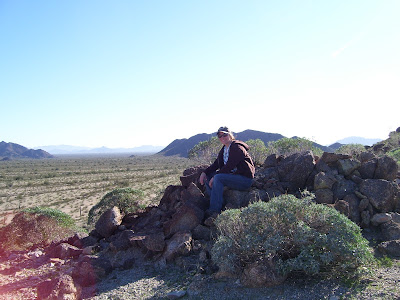 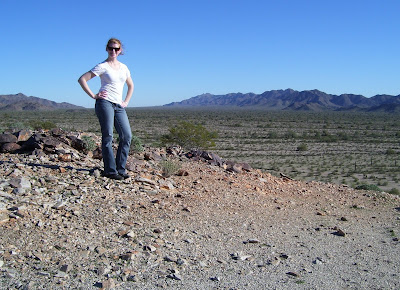 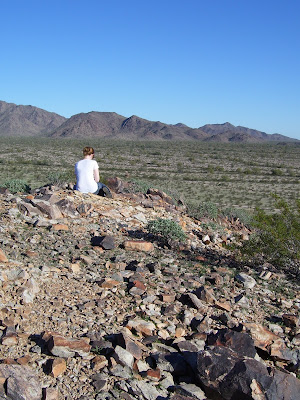 (Most of these landscape photos were taken by Jen,
who is far better at composition than I am.)
After the hiking, we were pooped, especially me, because I had climbed that little mountain in dress shoes.  Well, and during the hike we had a lengthy story-telling session about poop and I laughed until I wept.  I burned a shit ton of calories laughing that hard, I just know it.

The next day I had to return the rental car, so Monday and Tuesday were pretty much spent riding the city bus and train.  I mean, we went out for ice cream, and roller skating, and to the Arizona Natural History Museum, and to a country dancing bar, and to a porn megastore, but each of those places required a 1.5 to 2-hour bus ride each way.  Not that we didn't see interesting things on the bus, like how perfectly normal people here in Phoenix often drape themselves in blankets when running errands instead of wearing jackets or sweaters when it's chilly, as well as people who wear machine gun-shaped silver charms on their necklaces.  I just hadn't planned on spending that much time on public transit.

Jen didn't seem to mind, since it was also the first time she'd ridden a train or been in a place where it was warm and sunny in January.  "I love Arizona.  I don't want to go home," she lamented.

"Then stay here," I said.  "Or go home and start planning your move back here.  Then you can keep me company when school is making me sad."

She seemed to seriously consider it.  "Maybe I could study bats and saguaros at ASU."

I mean really, how hard would it rock if our next vacation was to the Grand Canyon? 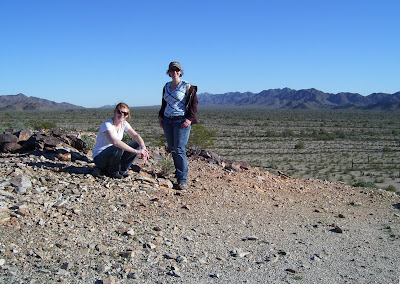