I refuse to get snipped.

So yesterday I went to get a another second opinion from a fifth orthodontist.

Quick backstory:  I got my braces in Wisconsin and adored the orthodontist I had there.  Then I moved across the country and transferred to Dr. Blockhead, whom I despise because when I pointed out that my teeth weren't getting any straighter, he started to make up stories about how I'm just too deformed and my teeth are unfixable.

My bullshit meter went nuts when he said that, so I got a second opinion from Dr. Hairyballs, who, by the way, was a complete FREAK.  He himself had crooked teeth but was obsessed with absolute perfection in all his clients.  During the consultation he put me in a headlock and violently rattled my jaw almost out of its socket, yelling, "Do you have TMJ??  Do you have any clicking or popping?  Do you grind your teeth at night?  Do you have any headaches??  Are you sure you don't have any headaches??"  He said my teeth were indeed fixable if I was willing to shell out another several thousand dollars and wear my braces for another 1-2 years (I was supposed to have them off last month), with the possibility of having bolts screwed into my jaws.  He also ordered me to go get my little upper lip frenulum snipped by a cosmetic surgeon.  True, my lip doodad hangs a little lower than it does in other Homo sapiens, but it doesn't give me any problems and no one can even see it unless they have my lip pulled back over my nose they way Dr. Hairyballs did.  Spending money to have it clipped is one of the dumbest ideas I've ever heard in my life, and since he told me that, I've become very protective of my doodad.  It's not going anywhere, thank you very much. 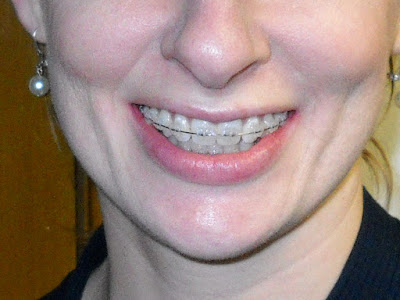 Exhibit A:  Harmless, inconspicuous, unassuming lip doodad.
I may have left Dr. Hairyball's office utterly traumatized and I may or may not have had to duck into an Arby's bathroom to pull myself together, but the visit wasn't a total loss because I did receive a confirmation of my suspicion that Dr. Blockhead (see previous post) had lied to me about my teeth being unfixable.  Hairyballs said that Blockhead prides himself on how fast he can get patients in and out of braces--10 months on average.  My demands for a properly aligned bite would require more than 10 months, which would mess up Blockhead's beloved average and his major selling point.  His intention was to remove my braces prematurely and make up some story about my jaw being deformed and my teeth unfixable.

Obviously I don't want to go back to Dr. Blockhead, and after that all that headlocking and jaw-rattling I wasn't about to switch to Dr. Hairyballs, so I called another orthodontist, Dr. Pissant.  His secretary answered and I asked if I could schedule a consultation for a possible transfer.  She was all sweet-like and said yes, and after she took all my information, I made the mistake of revealing that Dr. Blockhead was my current orthodontist.  She immediately put me on hold for 10 minutes, and when she came back her tone of voice had completely soured.  She chided me for trying to transfer to someone else within the Phoenix area and said that I was not welcome in that office unless Dr. Blockhead called Dr. Pissant personally and handed me over with his blessing.  I pointed out the fallacy in that argument, to which Secretary Buzzardcrotch huffed, "Well, it's professional courtesy!"

As my friend Jen commented later, "That's like saying you need permission from Wal-Mart in order to shop at Lowe's."

"EXACTLY," I said.  I figured Dr. Pissant was probably Dr. Blockhead's best friend or brother-in-law or nephew or lover or something.  Why else would they deliberately drive away my business like that?  Professional courtesy my ass.  Somethin' funny is afoot over yonder, I tell you.

So I just hung up on that woman and instead called Dr. Dunkelblau, and that's who I saw today for a consultation.  And FINALLY...an orthodontist who was nice and normal and not a flaming weirdo, who didn't karate-chop my face or put me in an upside-down headlock.  And whose staff wasn't creepy and slimy and all up in my bin'ness.  I knew Dunkelblau's office was a good one because the woman doing my complimentary x-rays was from Wisconsin.  However, while Dunkelblau was very nice and non-weird, and smart enough not to say anything about my doodad, he did have the same bad news as Dr. Hairyballs:  if I want my teeth to line up right, I need to either have bolts put in my palate or have one of my perfectly good premolars removed so that my top teeth can shift to the right (my right).  I'd have to fork out another $2700 for the tooth-pull option or another $4600 for the bolts option, and both would require another 1-2 years in braces.

If I had the money, I would definitely choose the bolts option, because I can't bear the idea of making an appointment to have a nice tooth pulled.  I can't bear the idea of going to that appointment and having needles shoved into my gums and to feel the dentist yanking that poor innocent premolar right out of its socket and then trying to swallow painkillers with bloody gauze stuffed in my very swollen mouth, just to gain a few measly points on the prettiness scale.

I don't understand why my options are both so extreme.  Is there no moderate, centrist version?  When I first got braces I was told I would not have to have any teeth pulled or undergo any radical procedures to get my teeth straight.  Nope, just simple braces for a year and a half, I was told, and my teeth would look really good.  Now I'm being told the exact the opposite.

But, the fact is that I can't sink any more money into orthodontics.  I already blew $6,000 on it, which was too much, in my opinion.  I'm not paying any more.  So, as much as I would love to have teeth that line up perfectly and as much as I would love to have my dentist stop complaining about my bite being whack, I'm going to have to settle for so-so teeth that don't really line up at all.  Which is exactly where I was before I threw $6,000 down the drain.

You know, I look at this poor decision I made, and I look at all the other poor decisions I've made over the course of my life, and I wonder why I haven't been assigned a caretaker by the courts yet.  Clearly I need someone to make these decisions for me, because I consistently get myself into a lot of trouble when I try to make them on my own.  Ugh.  I'm declaring myself incompetent.

I hate being human.  I wish I was a flatworm. 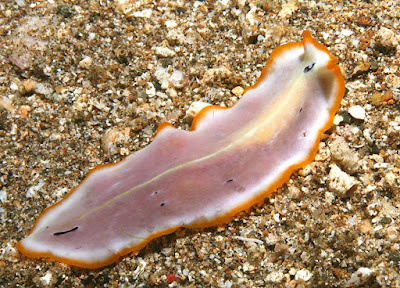