Wow, it's been over two weeks since I last blogged!  Sorry 'bout that.  So much has been going on, and there's so much to say.  Well, let's just start with the weekend before Valentine's Day, because that's when my dad's sister Sally and her husband Jack happened to be coming to Phoenix to visit other friends, and we decided we should meet and have lunch.

The twist in this story is that, until just a few months ago, they never knew I existed.  That's because when I was born, and for 29 years afterward, my dad didn't tell a single person in his family that he had a daughter, not even his parents.  It took me contacting my long-lost brother, who then told our common aunts and uncles, who then asked dad for verification, for him to confess that he had a daughter.

So Sally was the first of my dad's relatives that I met, and I was nervous.  I had no idea what was going to be said or how it was going to go.  But happily, both she and her husband were total sweethearts--very warm and welcoming and easy to talk to--and we ended up talking for three hours.  They called me "a lovely young woman" and said, "If you were our daughter, we'd be crowing about you as much as we could."  They also gave me a sweet little present, a necklace with a family tree design on it: 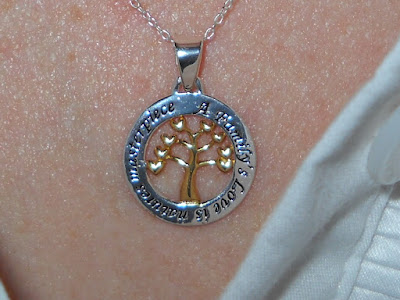 "Welcome to our crazy family!" Aunt Sally chuckled.  Lucky for me, there are a few nice ones tucked into all that craziness. 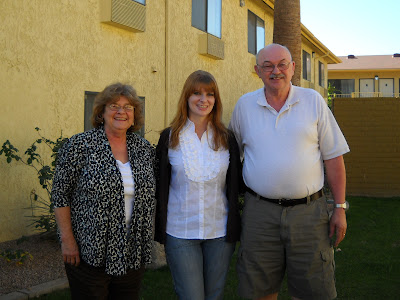 To my amusement and relief, Sally admitted that my dad was difficult to communicate with and that she doesn't understand him, never really did, and probably never will.  She keeps civil contact with him primarily because, she said, life is too short to build walls and hold grudges.  So apparently she has a lot more tolerance and compassion than I do--and kudos to her for that.

When asked why he kept me a secret all these years, Dad had the same answer for her as he did for me:  "Who cared?"  Meaning, he didn't think any of his relatives would care that he had another kid.  He has told me numerous times in person as well as in writing that, like his own father, he (and I quote) "suffered no deep, inner, burning urges to blab his business to the world, the exact opposite of today's 'trendies.'"

"Private person" my ass.  Who does he think he's kidding, exactly?  A "private person" is someone who stays out of the public eye, not one who flounces around in it like RuPaul.  Or like, well, me.  Also, there's a difference between privacy and lying by omission to impress other people.

Furthermore, why was the possibility of someone "not caring" about his parenthood status of any importance?  What does it matter if other people aren't thrilled with the fact that you're going to be a parent?  Why would that stop YOU from being happy about it?  I just don't understand how anyone can keep such big news to themselves.  How is that even psychologically possible?  Besides, my dad didn't know for a fact that people wouldn't care, he just assumed.  And assumption is the mother of all fuck-ups, as the saying goes.

The most parsimonious explanation is that he was embarrassed that he'd fathered a child out of wedlock, so he hid the fact from everyone.  But in doing so, he barred his child (me) from the support system of grandparents, aunts, uncles, and cousins on that whole side of the family for almost 30 years.

Fortunately--and I am SO thankful for this fact--now that his relatives know about me, they've been reaching out with all sorts of kind words and invitations and wonderfulness, and I can't thank them enough.  So, despite my dad's aberrant behavior, I consider myself a very lucky girl.