That, my friends, is the sound of my neighbor Bob playing his music loud.

He lives in my apartment complex, four doors south from me, on the other side of the courtyard.  Every few days, from about 4pm to 9pm, he props his front door open and turns his music up while he tinkers in his apartment alone.

I used to play my music loud when I was a teenager.  I did it all the time--when I was home alone, or out driving, or hanging out outside--because I thought everyone would hear my music and admire my great taste and think I was awesome.  And I didn't mind when other people played their music loud, because that told me where the party was.  I got over it by the time I was 22 or so, when I figured out that a) the showing-off thing never worked, and b) music only needs to be at a certain level for one to enjoy it.

Bob, however, is completely grey, well into his 50s and maybe even pushing 60.  I suppose he imagines himself to be "youthful" or "a cool cat" or "laid back" or something, what with his strangely rounded hippie beard and his flannel shirts, slamming booze and playing classic rock.

Now, I happen to like classic rock a lot.  However, as I have told him, I can't hear the melody or the lyrics from my apartment, only that stupid, irritating bass.  And just because I like classic rock doesn't mean that Bob gets to decide when I should listen to it.  Over the past 7.5 months that this has been going on, I have gone to his apartment at least 15 times, possibly 20 (seriously) and asked him very politely to please keep his music down.  I have also nicely talked to the apartment manager about it 3 times, and to the landlord 2 times.

Voicing my concerns has gotten me absolutely nowhere.  The landlord, the manager, and Bob all huff pompously, "Well, you're the only one complaining."  Therefore I don't matter.  I don't count.  Or they think I'm making it up to get attention...?  They can't grasp the simple concept that bass can travel very long distances, and that probably lots of other tenants can hear Bob's music but don't complain because confronting other people is stressful and they don't want to.  It's stressful to decide whether or not you should even bother going over there to talk to the person, and then to put your shoes or slippers on and trudge over there, thinking of what to say, and to confront them about their bad behavior when you're already pissed off but trying to hide it and you have no idea if they're going to be nice or call you a stupid bitch or pull a gun on you or maybe they're on drugs or in a gang or who knows what.  It's scary and it's stressful and I don't like doing it any more than anyone else does.  But, I also believe that if someone is bugging you, you should be assertive and tell them right away, and not just stew silently about it until you explode.  A lot of times people aren't aware that they're being annoying, so they have to be told.  Sometimes it works like a charm, but sometimes it does absolutely nothing.

Bob had his music loud again earlier this week, and I was so sick of being diplomatic about it.  So I went over there and yelled at him.  Not nice at all.  I raised my voice and pointed my finger and shouted over him when he tried to interrupt me, and I yelled some more.  And then I stomped back to my apartment, wishing he could appreciate how much I truly hate his stupid fucking guts and how much I'd be pleased if he got hit by a bus.

Instead, he had his music loud again, today.  I knew he wouldn't keep it down for good.  I was just waiting for it, waiting for that next round of machine-gun fire to assault my ears.  And it's not like I'm one of those people who can't stand any noise at all.  I'm totally fine with the normal sounds of life--children playing, dogs barking, the buzz of vacuum cleaners, lawnmowers, motorcycles, airplanes, or trains.  But that bass, man.  God, it drives me absolutely crazy.  It's like listening to someone thump a basketball against a wall for hours, or someone drumming their hands on a desk, and you ask them to stop, and they just keep doing it and doing it because they can, because they have the IQ of a soggy potato, or because they're on meth and they were abused as children and they like loud noise because it drowns out the demons prowling their psyche, or whatever their fucking problem is.

What else can I do?  I am currently wearing, and have worn, earplugs in my own home, yes.  The expensive kind that are balls of silicone putty and seal your ears completely.  The last time I wore them I had debilitating vertigo for 3 days afterward, but I can't wear the little foam dart-type plugs because they fall right out of my ears.  What else?  Should I get some noise-cancelling headphones?  Do those even work?  Should I buy a television and just have C-SPAN or the Weather Channel cranked up to the max when Bob is home?  Should I get a white noise machine?  Do those make deep enough sounds to cover bass?  The other problem is that if it's loud enough, bass also vibrates your entrails, and there's no help for that.

One option that is tempting is to just move, maybe even to another city because I am not impressed with Phoenix at all and I still hate grad school.  But I also know that no matter where I go, I will never be able to escape bass, ever.  No matter where I live, for the rest of my pathetic fucking life, I will never be able to relax, because there will always be some idiot with a big stereo or a subwoofer thinking (wrongly) that he's hot shit.  This even happens out in the country or when you go camping.  Two summers ago I traveled with friends to Minnesota, and on the way we stopped to spend the night at a beautiful lakeside cottage out in the middle of nowhere, in the woods of Wisconsin.  This cabin was nestled on the prettiest little beach along with some other cabins, and that night we sat under the stars and enjoyed a campfire.  All was wonderful and serene and beautiful...until someone way on the other side of this big lake, at least a half mile away, turned up their bass, and the noise penetrated the entire region, every one of us slaves to that one person's utter selfishness.

It was so unbelievably sad.  Well, if you're a man, you probably think it's hilarious.  And that disgusts me. 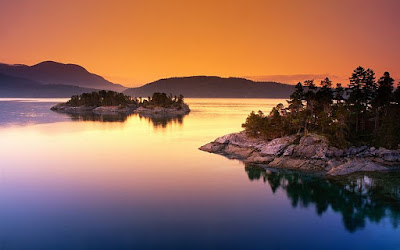 Thooom thooomp thooomp thooomp thooomp.
I wonder how large a plot of rural land you'd need in order to insulate yourself from your neighbor's bass music.  40 acres? 100 acres?  Would the property have to be densely wooded and/or mountainous?  How will I ever get enough money to buy that much land?  Maybe I could rent a country house?  But then I'd also have to buy a car.  Unless I lived on a self-sustaining farm and never had to go anywhere.  Maybe I should join a commune?  Or run away to Tibet and live in one of those silent Buddhist monasteries where no one even speaks?  That sounds like heaven, truly.  Or I could try to find an ICF (insulated concrete form) house or apartment building with soundproof walls and windows, but those places are pricey, too.

Or...I have an idea.  Maybe people could just  SHUT THE HELL UP.
Posted by An Extra Human at 22:57
Email ThisBlogThis!Share to TwitterShare to FacebookShare to Pinterest
Newer Post Older Post Home