More things I'm not supposed to like or want but do anyway.

I love miniatures and I love dollhouses.  I can't believe I just said that on the Internet.  What is wrong with me??

But I can't help it.  Miniature stuff is tiny and cute and it makes me smile and giggle and squeal.

But don't you just hate the dolls that go inside dollhouses?  Ugly as sin, nearly every time. 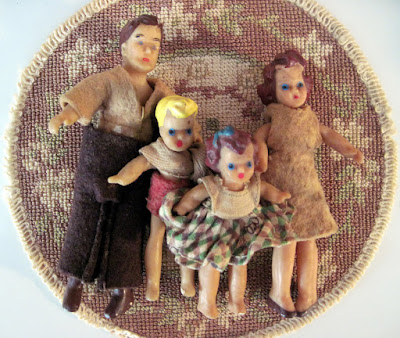 Their faces in particular are always fuckered up.  Why is that?  Why can no one seem to make a decent-looking dollhouse doll?  One would think it's a skill well within the realm of human possibility, and yet it escapes our grasp.  When I was little, ugly dolls ruined the experience of playing with a dollhouse, because how can your imagination take flight when you've got what looks like Satan's dingleberry in your hand?  I just left my little plastic hand-me-down dollhouse devoid of dolls entirely and imagined that really beautiful ghost-people lived inside it instead.  I once saw in a magazine a miniature house that was set up to look like a mouse burrow, and instead of dolls, there were four little stuffed mice living there, and I was convinced that was the way to go.  Have your dollhouse, but put little mouse dolls or teddy bear dolls in it instead.  Don't even bother with those shitty human ones.

Well, I guess the dolls are just an afterthought, anyway.  The itty-bitty furniture and the teeny-weeny foods are the fun part! 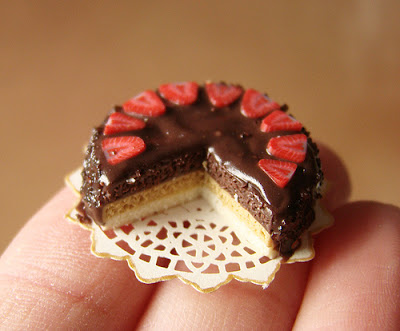 photo: Dipity.com
It's a shame that I got rid of all my dollhouse stuff when I was a teenager.  When I was trying to be all grown up and let go of childish things, and trying to purge as many of my belongings as I could in preparation for my extended travels.  I haven't bought any miniatures since settling down, either.  Because I'm a grown woman, for heaven's sake.  I'm not supposed to like dollhouses.  People will think I'm weird and immature and tacky, and probably have a few screws loose.  I'm supposed to like going to museums and playing sports and...I dunno...going to the ballet or something.

But ever since admitting that I want to be a mom, I've kind of been on a roll about giving up on things I should be doing, should be enjoying, should be pursuing, and should be wanting and having.  It's kind of like I've spent years and years holding down a big oppressive cement slab, and now I've stepped back away from the slab and am okay with whatever bubbles up to the surface.  And maybe I am weird and immature and tacky.  So what?

OMG, I was just googling dollhouses now (when I should be analyzing stats for my paleoanthropology research project...ugh) and saw this beauty, which reminded me of the one described in the Flowers of the Attic series.  Ooh, that dollhouse was the creepiest, coolest part of the whole story. 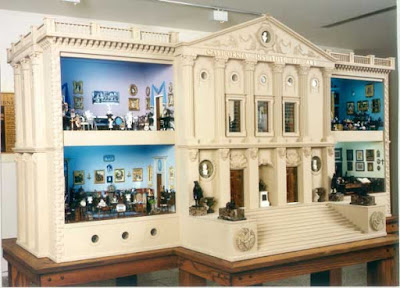 photo: http://www.syvtelcom.com/miniature/home.html
I'm not sure I'm at the point where I would actually buy a dollhouse and start collecting again, though.  It's an expensive hobby, even if you make all your own furniture and accessories, because you still have to get the materials and paint and glue and whatever.  It requires a bit of extra space, too, and I'm kind of a minimalist.  Owning lots of stuff makes me nervous.  They make horror movies about packrat-type people, you know?

So I'm torn.  Maybe someday.  For now, I'll just lurk the many blogs about miniatures, the Etsy shops that feature them, and perhaps enjoy an issue or two of Miniature Collector magazine. 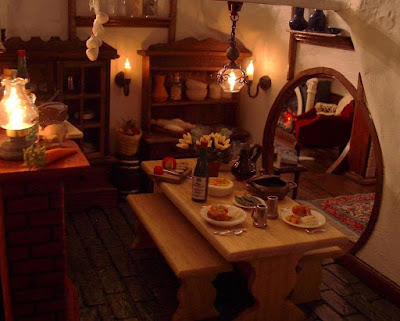