I recently had to explain to my elderly mother what a blog is, and I told her it's like a diary that you keep on the Internet.  That's sort of correct, ya?  I think it was author Kate Fox who described bloggers and autobiographers as "professional soul-barers."  I do like that term, but I won't be going pro for a while, if ever.  For now I'm an amateur.

Alright then, Internet diary, where did I leave off?

So school got out on Tuesday.  I should be thrilled, but instead I'm anxious about being able to find a job, as I have no concrete, marketable skills.  I mean, I have an education and I value that for its own sake, but I have no trade skills that employers would value.  I'm not a plumber or a mechanic or a computer programmer or an anesthesiologist--I can't really DO anything specific.  I'm a general laborer.  On the other hand, I don't want to be so specialized that I can do only that one thing.  I dunno.  I'm scared.  I walk down the street and look at the hundreds of beautiful homes and shiny cars that surround me and think, Look at all of this money.  How do people get so much money flowing to themselves?  How do they know what to study in school that will make them so much money, when there are so many conflicting reports about which professions are in the highest demand at any given time, and by the time one finishes school, the situation may be different?  I have a lot of school loans to pay off and for the first time in my life, I am viscerally terrified of the future.  I don't see how anything good is going to happen at all.  I guess I should go back to school and learn a trade, but I just spent the past 5 years in school and really can't afford to spend any more time there.  I need to be working.

I do have a little bit of savings to last me the summer, but a few weeks ago I had to send the IRS $1,000 for taxes owed on my 2011 fellowship from ASU, and from my dancing earnings last summer.  And on top of that, I'll have to spend another $1,000 on dental work in two weeks.  Ugh.  I got my braces off this past Wednesday, and when I was there, my orthodontist told me that my gums were (and I quote), "really healthy."  That wasn't a surprise because for many years, every time I went to the dentist, I received a bill of perfect oral health.  I mean, I have 7 fillings, but 6 of those I got a long time ago when I was young.  Then I got braces two years ago, and you can't get braces unless your teeth and gums are in perfect health, which mine were.  Even just one year ago, when I was still in Wisconsin, my dentist said everything looked great except one of my old fillings would need to be replaced soon.

Now, yesterday I went to the dentist for another cleaning and to finally get that old filling replaced, and what did they tell me?  That I have two dangerously massive cavities and periodontal disease!  Are you fucking kidding me?  How did that happen?  I went for years and years with no significant oral problems, and now all the sudden my teeth are rotting out of my fucking face?  What the fuck.  They even showed me on the x-rays the two big gray spots where these cavities are, hiding in between my teeth.  Oh, I was SO pissed.  And confused.  And embarrassed.  How did this happpennnnnnn????  How was it that when I had crooked teeth they were healthy, but now that they're straight, they're rotten?  Why do I not have any of the symptoms of tooth decay or gingivitis?  No unusual sensitivity, no pain, no bleeding during brushing/flossing...?  It is so bizarre.

As my friend Jen says, Sifl and Olly were clearly ahead of their time.

Anyway, I spent a while yesterday mentally going over what I've done differently over the past year to bring this upon myself, and I concluded that the main culprit was a decreased motivation to take care of myself as well as I normally do because I was so depressed about school and just hating my life and myself in general.  Because that's one of the things that depression does to you.  It makes you not give a shit about anything.  It makes every task seem completely fucking pointless.  I'm over it now, for the most part, but I will be paying a pretty penny for it in two weeks when I have my appointment to get all this crap fixed.  Needles and drills and periodontal probes, oh my!


As if I needed another reason to think that coming to grad school was a profoundly terrible idea, or any more reasons to despise that incompetent ass-wipe of an orthodontist.  I'm not exactly thrilled with the results, as I've said before. Look at how canted my bottom teeth are now.  They were never that way before I had braces.  And my midline is still off, and one front tooth is lower than the other.  I just don't feel like this small improvement was worth $6,000 and 2 years of my life.

Below is a picture of my bulbous cranium.  This image is kinda hilarious.  Check out that indentation at the bregma (where the coronal and sagittal sutures meet), and my fused but un-ossified lambdoid suture (where my parietals and temporals meet the occipital bone).  The lambdoid is one of the last sutures to ossify in humans, so a forensic scientist could possibly use that information to determine that I am in early-mid adulthood and that I am neither juvenile nor geriatric.  They could also look at my relatively smooth occipital bone and small mandible to help determine that I am female.  You know, if my remains are ever found in a ditch somewhere or something. 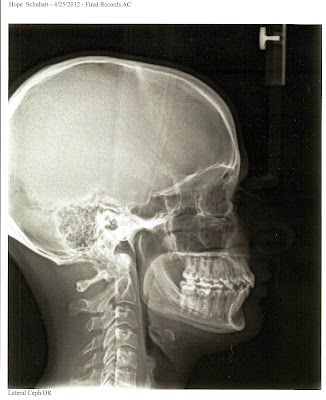 I also sent this photo to my mom.  Maybe she will frame it and hang it above the mantel.
My health in general hasn't been so great since I started grad school.  My chronic dizziness went away, so that's good, but since February I also had had this constant stomach ache and nausea, like my guts were just roiling and cement was churning in my entrails.  I kind of wanted to go to the doctor, but thought better of it, because if you go to the doctor about a digestive issue, they're probably going to want to stick something in your butt.  I mean, I didn't know that for sure, but I didn't want to take any chances, because I am not down with that sort of thing.  Instead I picked up some charcoal tablets from the health food store and ate a bunch of those for a couple days, and then I ate yogurt for a few days after that to help normalize my gut enzymes.  And wouldn't you know, that did the trick!  I am completely serious.  My two-month stomach ache was gone within two days of eating the charcoal, and I felt normal again for some weeks.

Until the IHO 30th Anniversary Gala this past Thursday.

IHO stands for the Institute of Human Origins, which at my school is like a mini-department within the bigger anthropology department.  Since it's been 30 years since the Lucy skeleton was found, IHO had a super fancy party this past Thursday to celebrate and to thank all the rich people who've donated to the research program.  We grad students were invited to help set up and tear down for this event, and to attend the fancy dinner along with the rich people.  So I went, and there were a lot of people there, and the dinner was nice but not one where you could choose what you wanted.  Everyone was served the exact same thing, and steak was the main course.  I love steak, but was quietly horrified when the caterers brought out plates and plates of blood.  I have never seen steaks so rare.  And hundreds of them!  I looked all around me and saw nothing but plates of blood, as far as my eye could see, and wondered if I had missed a memo about an Elizabeth Bathory birthday party or something?  Why would a catering company serve improperly cooked meat to 150 or so people?  Aren't they pushing some serious liability buttons by doing that?  I watched in confusion as everyone started digging into their bloodbath beef, and I was so hungry from working all day and it's not like I could order anything else or send it back, so against my better judgment, I ate mine too.

And let me tell you, it was gross.  It was limp and squishy and soggy and flavorless, like chewing on a dead slug.  It had hardly any brown around the edges, and not even any crispy charred black parts.  It was just bloody mush.  And surprise, surprise, less than 9 hours later I was violently ill.  Stomach roiling resumed.  Charcoal tablets and yogurt back on the menu.  Today I am feeling better, but still, I'm done with this roiling stomach baloney.  Done with it!

So on top of all that, one of my sisters was in the psychiatric ward for 4 days this week.  I have silverfish in my apartment now.  I have not one but two neighbors who play their music loud now, sometimes at the same time.  And I have discovered that Mr. Cheesebrow and I are a not a good match, so we are no longer talking marriage and children, or even talking at all.

In the words of Marilla Cuthbert, that's a fine kettle of fish.  Or, in the words of Harvey Danger, I'm not sick but I'm not well, and it's so hot 'cause I'm in hell.  That pretty much describes how I'm doing at the moment.  Last night, as is my end-of-semester tradition, I drowned my first-world sorrows in the 1995 BBC adaptation of Pride and Prejudice.  Except now I have the 2-disc, digitally restored DVD version, so it was 5 amazing hours of empire waists and horse-drawn carriages and knowing glances.  In my words, utter bliss.  Every time I watch this film, I catch some other little detail that I missed before.  Hence why it's fun to watch over and over.  Well, on the rare occasions when I have 5 hours to throw away on escapism through cinema. 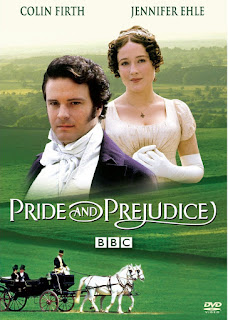 At one point in this film, Jane, the eldest Bennet sister, assures Lizzie, "I shall be myself again."  And Mr. Darcy says to himself, "I shall conquer this!  I shall!"  That's how I feel now.  After these past 9 months that have been so shitty and yucky, I need to hit my reset button and download a different OS.  Personally speaking.  'Cause what I'm doing now isn't working.  I shall look for a job and pay off my loans and get my life back on track and get crescent fresh.  I shall!