I feel bad about Ken.

Anyway, school was fine, I had no real problems there, I had no housing or transportation issues, I passed my trucker road test two weeks ago, and now I am licensed to drive semi-trailers.  Below is a picture of me driving a semi-trailer, also known as a big rig, an 18-wheeler, a tractor-trailer, a combination vehicle, a commercial motor vehicle (CMV), a van (non-tanker), or simply a truck: 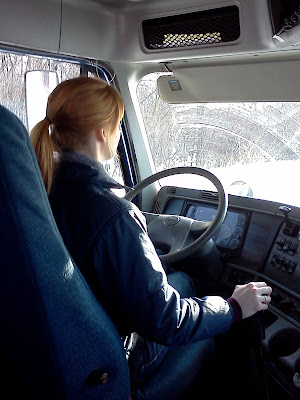 I like driving truck--so far.  Tomorrow I leave for Des Moines to meet with my trainer, and for 5 days thereafter I'll be driving her truck under her supervision.  We're going to make real deliveries and go through weigh stations and get fuel and slide our tandems and fifth wheel and update our logs and sleep in the sleeper berth and shower at truck stops and do all kinds of other trucker things.  And hopefully we'll go over some mountains while making these deliveries because I only know the theory behind safe mountain driving and haven't had the opportunity to actually do it.

This morning our class watched the following video (sans commentary and aftermath pictures):


I was absolutely horrified when I saw this, and absolutely fascinated, so of course I had to look it up on YouTube after class this afternoon and bookmark it, and YouTube is a rabid wild animal and going there is like walking into a lion's den, and what did I do but spend an hour watching low-quality footage of people dying in violent crashes, one video after another after another and upsetting myself.  This one almost made me cry:

Earlier this week, on the first day of this advanced company-sponsored training, the classroom instructor said that the company receives hundreds of applications every day, and that we were the survivors of the screening process and we were the "best of the best."  I almost laughed out loud at that.  I think what he meant is that we were the only ones to pass the multiple drug screens, because there were a few people in the class who'd been chatting with me earlier that morning and who I was certain would not make it through the first week.  And they didn't.  Three out of fifteen people got washed out of class for not meeting basic expectations. But I guess it's better to get eliminated from training and sent home than to get eliminated from driving by dying in a fiery crash and taking a few bystanders down with you.

There is one person who did make it through the first week and whom I'm kind of worried about.  Let's call him Ken.  I'm not sure I'm worried so much about his driving as I'm worried about his soul.  I say that because he's one of those people that just looks sorry.  Like, both apologetic and just straight up pitiful.  Everything about him from head to toe just made me feel bad for him.  Every time I saw him or heard him speak, I just felt terrible.  He was an older gentleman, with thinning gray hair, a sad face, and big bags under his tired and weary eyes.  His clothes were normal and he didn't smell bad or anything, but his voice, posture, and body language were so timid and submissive and bashful.  He reminded me of one of those rescued dogs you see in the shelter that's been beaten its whole life and just kind of cowers and keeps to itself, and hangs back looking pathetic and dejected while the other dogs fight over the meat.  No confidence, no conviction, no inner strength.  And to make it worse, Ken was kinda slow, both time-wise and mentally, so the people around him sometimes got impatient and would bark at him.

I felt like I had a moral responsibility to reach out to him and be his friend and give him a hug or something, but I worried that he would've glommed onto me and taken it as sexual interest, because that's happened to me a couple of times before.  That's what worries me about doing humanitarian work with anyone other than women and children.  I don't know what to do when I come across men like Ken--men who can't or won't hold their own against the other men, and who seem like they don't have a friend in the world and who just look and act so pitiful.  It makes me so sad, but I don't want any more stalkers, you know?  Especially as a woman traveling and living alone almost all the time.

Poor Ken.  I wonder if he's okay tonight, if he has something to eat.  Does he have any money or a place to stay?  Does he have a phone or anyone to call?  Does he have any friends, or a girlfriend, or any family?  Do they all hate him and berate him and pick on him?  Was all the smart beaten out of him as a kid, and that's why he doesn't have a lot going on upstairs?  I truly believe that beating a child makes them dull.  It breaks their spirit to the point where they're unable to dream and scheme and hope and even learn anymore, to where the brain just gives up and operates the body as a lifeless shell.  I honestly do believe that.  I worry that this happened to Ken a long time ago, and I'm not sure how to help.  I thought about him today after school and I cried for a while.

How dumb is that?  I'm making a lot of assumptions here, probably all of which are untrue, but I'll never know for sure because I didn't ask him.

I guess I'm just tearful today.  Drivin' and cryin'.  Things are going really well for me personally, but I just feel bad.  I feel bad that people die in terrible crashes and other people have had their souls beaten out of them, and I don't know what to do or think or say about that.

I'm concerned about you, Ken!  I'm sorry I wasn't friendlier this week.  But I'm not hitting on you or anything.  I want to buy you some food and give you a hug, but it's out of pity and not, you know, desire and stuff.