My boyfriend's kids make me not want to have any.

And it's kind of a relief, because I know I'll never be able to afford my own kids anyway.

I've previously posted many, many times about how much I wanted kids, and a lot of my decisions over the past few years have been based on the assumption that I would someday soon be a mom. For example:
And THAT is how badly I've wanted to become a mom, and how much my friends know it.

When I met the Dutchman this fall, there was such a great connection between us that it wasn't long before he was bringing up the idea of spending our lives together and having kids, much to my delight at the time. Like I've mentioned before, he already has two young ones--a 3-year-old girl and a 6-year-old boy. For him, having another kid isn't really a big deal, mentally. He introduced me to his kids shortly after we started dating, and they are adorable and sweet and funny......when they're not fighting and arguing and yelling and hitting and biting each other. And when they're not crying about having to get dressed, eat their breakfast/lunch/dinner, brush their teeth, go to sleep, or go to x, y, or z activity. 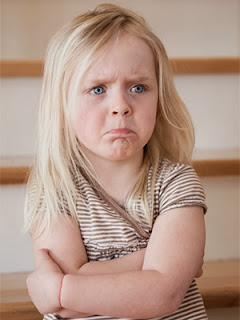 I know that most kids are like that. Kids get upset when they have to do something they don't feel like doing, which is almost all the time, and they don't understand long-term benefits of things like teeth-brushing or eating vegetables. They're extremely sensitive to perceived injustice. And because they have no power to change anything, all they can do is make their feelings known via crying, whining, and tantrums, etc.

I get that with kids, everything is an ordeal. Eating, grooming, putting toys away, putting on a goddamned jacket--everything takes forever and requires a series of assurances and negotiations. And let's not even get started on the homework battles that occur with older children. I have 8 nieces and nephews, 5 of whom I babysat constantly in my preteen and teen years (so much so that one of my girlfriends at the time told me in a very serious and concerned tone that I needed a vacation), so I'm no stranger to crying, arguing, sticky fingers, vomit, bed-wetting, spit-up, diaper changing, or cutting the crusts off a perfectly good sandwich. I don't have romantic notions of child rearing. I know that it's dirty, difficult work, day in, day out, with no breaks, no privacy, and perpetual interruptions, and on top of that, other adults are constantly judging you and criticizing your parenting skills. Kids are fickle and selfish, they lie all the time, and they have no idea what they're talking about. They may say they love you and tell you you're beautiful one minute, and five minutes later scream that you're ugly and they hate your guts and wish you were dead. They sometimes tell other adults lies about you and how you run your household. They don't understand how much you sacrifice for them, how much you worry about them, or how you put yourself last every day for the sake of their comfort and well-being. But is it their fault that you do all those nice things for them, when they didn't ask to be born into your home and your life, when you're the one who made the decision to procreate in the first place?

Hanging with the Dutchman and his kids several times, often overnight, during the past month or so brought back a lot of babysitting memories, and it reminded me that the only successful way to be in the presence of children is to have a Buddha-like state of mind where you keep a few important things prioritized and let the rest of it just roll off your back. And when you see another parent sitting still with a numb look on their face while their kids are bouncing off the walls, and they say, "My kids are driving me fucking crazy. I can't take it anymore," you understand. You corral those kids and send them outside, you put on some classic rock, and you help that other parent accept that no matter how much we parents/caregivers selflessly give our best day after day after day, the kids will probably turn out to be serial killers anyway, so don't stress too much. 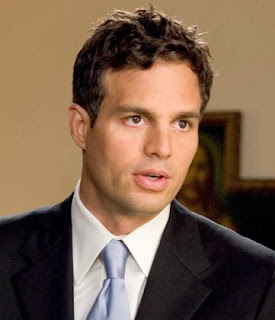 "If you're not yelling at your kids, you're not spending
enough time with them."  -Mark Ruffalo

My message today is that spending time with the Dutchman's kids a few nights per week is plenty. That's more than enough noise, arguing, whining, negotiating, tantrums, time-outs, spilled food, and poop jokes for me. A few days ago when I first had the thought, "His kids make me not want to have any," it felt kinda weird in my head, so I rolled it over a few times and chewed on it a little, asking myself if that was really true or if I was just having a hormonal day. I mean, kid-mess and kid-noise hasn't stopped me from wanting to be a parent before, so why should it now?

Then I thought, "Well, I just won't have any kids too close together. If I space them out a little more, like 5-6 years apart, that would minimize a lot of the arguing and hitting and yelling involved in sibling rivalry. Or I could have just one kid with no siblings." Then I remembered that kids still interact (read: fight) with other kids at school or little league or ballet and you still have to listen to that drivel. And even with only-children, you still have the crying, sticky fingers, vomit, bed-wetting, spit-up, diaper changing, cutting the crusts off a perfectly good sandwich, other adults constantly judging your parenting skills, and your kid being a fickle, selfish, noisy, spastic liar loving you one minute and wishing you were dead the next.

Lately I've been wondering about Buddhist monks who begin training at a very young age. How are the rigors of compassion, loving kindness, mindfulness, and meditation tolerated by the undeveloped human brain? How do those young monks turn out as adults, as compared to people their age around the rest of the world, both in developed and developing countries? I'd really like to meet one of these kids sometime. 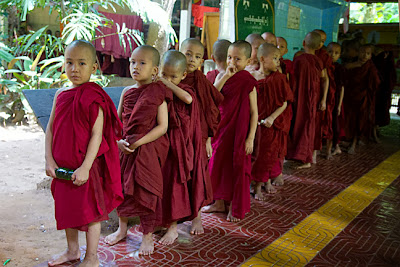 I know that being with kids isn't all negative. I know that in the long-term it's rewarding, and in the short-term, there are warm fuzzy times that melt your heart, like when they say cute things, when they're kind to others and remember their manners, when they try to feed you imaginary medicine and toy food when you're sick, and pipe up in your defense when someone throws an insult your way.

Still, I'm really glad the Dutchman has kids...so that I don't have to. I think it's the perfect setup: I can hang out with him and his kids every now and then and enjoy when his son or daughter reaches for my hand or wants to show me their cool karate moves, and I can help out with supper or bedtime. But when I'm not in the mood for horseplay or inane chatter, when they're at each other's throats and driving me crazy and, as cute and adorable as their sweet little faces are, I just can't fucking take it anymore, I can leave them with their dad and go home to my apartment and recover my sanity with an evening of peaceful solitude, reading, and reverie. The more I think about that setup, the more I like it. It's absolutely perfect. Why bring another hungry mouth into this world of finite resources when someone else already did? Why bring myself to financial ruin by having a kid when I don't have to? Why get married or have kids myself when I can already enjoy the benefits of both a family life and of singledom? Why live authentically when I can live vicariously?

My boyfriend's kids make me not want to have any. Not because they're bad kids--they're totally normal and not bad at all--but because all that work looks too tiresome and I like quiet activities like reading and blogging and taking long uninterrupted showers. It's a relief to think I'll never have to worry about the massive financial disaster that comes with having a child. It sounded great at first, but realistically, neither the Dutchman nor I have the finances to get married or have our own kids, which we've discussed. I also summarized these other thoughts to him last night as he was perusing the Internet for a new car seat for his 3-year-old. He replied by asking if my change of heart was temporary or permanent, and I answered that it might be temporary, but who knows? Because I don't know. It might be an opinion that lasts forever, but it might also change the longer I know him and his kids. And really, how many times have I flip-flopped on this issue since I started this blog (and on the blog I had before that!)