I love you, Florida.

I had a couple other posts ready for publishing, but with Hurricane Irma dominating the news the past week, I've been, well, forced to think about Florida a lot--why I went there, why I left, and what might have happened if I'd stayed.

First, know that I am a storm lover, storm gawker, and wannabe storm chaser. Back in my Red Cross days in Ohio, I was a NOAA-certified weather spotter and taught businesses on disaster preparedness. More times than I can count, I've followed Midwestern storms in my car during tornado watches and warnings, tailing the bow echo waiting for a funnel cloud to drop.

Part of what made Florida exciting to me was its notoriety for bad-ass storms. During one of the two tropical storms (Colin and Hermine) I weathered while living there, I was on the beach with Young Guy, running around in sideways rain and crazy wind, purely delighted from the top to the bottom of my soul. I love that sensational weather shit. I'm like Lieutenant Dan, laughing and howling and carrying on.

During the past week, as Anderson Cooper was shouting at us about Irma, I've received several texts from family and friends saying how lucky I am to not live in Florida anymore.

Hey storm lover, thank god you're not in Florida where that historic monster storm is happening! Whew! You really got lucky!

For a few days I was seething with jealousy, kicking myself for having left the Sunshine State. I'M MISSING THE GREATEST STORM IN HISTORY!! THIS IS HORRIBLE!!

I was also upset about missing out on pizza delivery money, because food delivery drivers make serious wads of cash during any kind of inclement weather. I COULD BE RETIRING EARLY RIGHT NOW!!

Anyway, I'd been tracking the evacuation maps of my favorite places in Pinellas and Monroe counties, and I contacted a few acquaintances there, asking if they were okay and what their plans were. There are so many questions I have about mandatory evacuations. How are they enforced? Do the police pound on your door and drag you out of your house? Where do the police and utility workers and other emergency responders sleep between shifts while the hurricane is passing, or do they all just stay awake for days on end?

I've been thinking a lot about how I probably should have majored in Disaster Management in college, if I'd even heard of that degree before late senior year. I had taken meteorology and geology courses and LOVED them, but meteorology, unfortunately, is 99.9% math formulas and building mathematical models on a computer. Blech.

When I woke up this morning, Irma's eye was directly over Key West, a place I didn't really care for when I visited, but oh, Key Largo! The upper Keys are truly amazing. What's going to happen to all the Key deer? What about the fiddler crabs?? Aww, not the fiddler crabs!! They're so adorable!!


I've been thinking a lot about how natural disasters have the most dire impact on low-income people--those who are just scraping by and living paycheck-to-paycheck or hand-to-mouth. People in that situation often don't have a car, don't have alternate places to stay, can't afford hotel rooms the next state over, nor do they have the means to buy stockpiles of food and water and batteries and generators and so forth. They don't work for companies that really give a shit about the employees or about providing meaningful disaster relief. Missing even a single day of income can really put a working-class person underwater financially. How many days or weeks does it take for most businesses to resume operations after a hurricane passes and get their employees back to working full time? How long can the average working-class person go without any income at all while waiting for their employer to reopen and get everyone back on schedule?

I've been thinking about, if I was still living in Florida, where I realistically would have gone if I'd evacuated, and what would have happened to my beloved car if I'd decided to ride out the storm, especially with my car being my main source of income.

I've been playing out a lot of scenarios in my head. If I'd still been delivering pizza, and the business was closed for the storm for 1-3 days, and then it took a while for them to get the kitchen back up to code after the storm and for customers to start ordering again to the point of needing a full regular staff, well, how long could I have gone without any income? Do people even really order pizza after a hurricane? If so, do they order from hotel rooms, and how long does it take for roads to get cleared of debris?

So many questions that would be answered if I'D JUST STAYED THERE.

I had a haunting feeling as I left the Tampa metro area and headed towards Georgia that I was making a mistake, that I needed to stay for at least one more year, but I was so overwhelmed with grief and sadness that I didn't know what else to do, where to go, or who to turn to except to my friends back home.

If I'd kept my baby and stayed in Florida, I'd now be eight months pregnant in the middle of a record-breaking hurricane, and any nursery items I'd been collecting and hoarding would all be soaked and blown away and then I'd really be up shit creek.

I've been thinking a lot about how I could have moved away from Young Guy but still stayed in Florida, and if I would have even been able to mentally recover without a change of scenery. If I'd stayed in Pinellas County, there was always a chance I would have run into him at the grocery store or on the beach or wherever.

This is why I like moving. I like not having to worry about bumping into my exes, especially since nearly all of them get married within a year after our breakup. I'm like that Good Luck Chuck movie or something.

I've been thinking a lot about my compulsive moving, which probably got wired into my brain when we moved so much during my childhood. I lived in 14 different places before my 18th birthday, and I've continued that nomadic lifestyle ever since.

Florida, however, was a different story. I loved it so much that I easily saw myself staying until the end of my days, until, of course, the Acutely Shitty Thing happened. And I'd never felt that way about any place.

I've been thinking a lot about where I belong in this world, in terms of living and being settled. These days I don't feel like I belong anywhere. I'm in Massachusetts now, having arrived a week ago. I came here for access to the Boston and New York art scenes, but I just have a sense of dread being here.

I dunno. Maybe I just need an afternoon in Cape Cod or something.

I'm just sad. Sad that I'm missing this really important hurricane, sad that all my favorite beaches in Florida are being ripped up as we speak, sad that if I return anytime soon, there won't be any housing or jobs due to the destruction, sad that this has been the year from hell with the abortion, leaving beautiful Florida, struggling through so many jobs, my court case (which thankfully was dismissed after being dragged out all summer), being harassed by the police multiple times, a big speeding ticket two weeks ago (my first in 13 years), and drifting about in the universe not knowing where to go.

Everything is a mess. 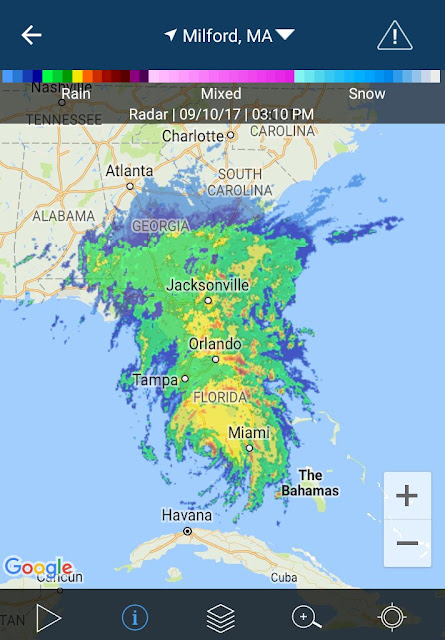