It's All Good in the Hood

In talking with my neighbors and also doing a Google street view search of my house, I recently learned that my place had always been the office in this trailer park until shortly before I moved in. 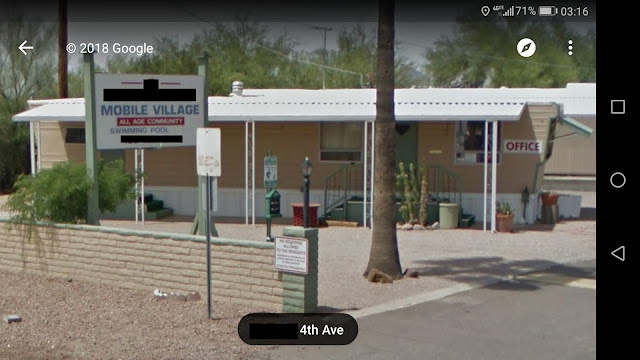 I knew it had been the office at some point, but I didn't know it had never been a living space...

...which explains a whole hell of a lot! If someone was only here doing paperwork and making coffee a few hours each day, and no one was ever sleeping or cooking or showering, that explains why there's no insulation, no heating or cooling system, and why the thermostat was never hooked up to anything. That explains why the kitchen and bathroom are 1956 originals and were never updated, why the water heater was so tiny, and why the shower drain is so delightfully fast. That explains why no one bothered fixing the window cranks once they broke, why people knock on my door asking for the manager, hang out in my yard and park their cars there, and neighborhood kids gather there like it's their damn playground and look confused when I ask them to leave.

Now I fully understand that I'm converting an office space into a living space. Which isn't a bad thing. I think home improvements are really fun. I like learning how things work and are put together.

But when I sell this place in five years and move into something nicer, I'll know to ask during home tours, “Hey, is this place insulated? Is that thermostat on the wall decorative, or is it a real one?”

When I put this trailer on the market one day, it'll have insulation, a mini-split heating and cooling system, operational window cranks, a bedroom closet, and a functional kitchen and bathroom. And possibly a washer and dryer in a nice storage shed out back.

It's going to be great!


Most recently, I scraped the crusty green carpet off the stairs, installed a new landing, and re-covered both front and back stairs with brown "eco" carpet made from recycled bottles. I still have to install the stair edging/nosing, but they already look SO much better: 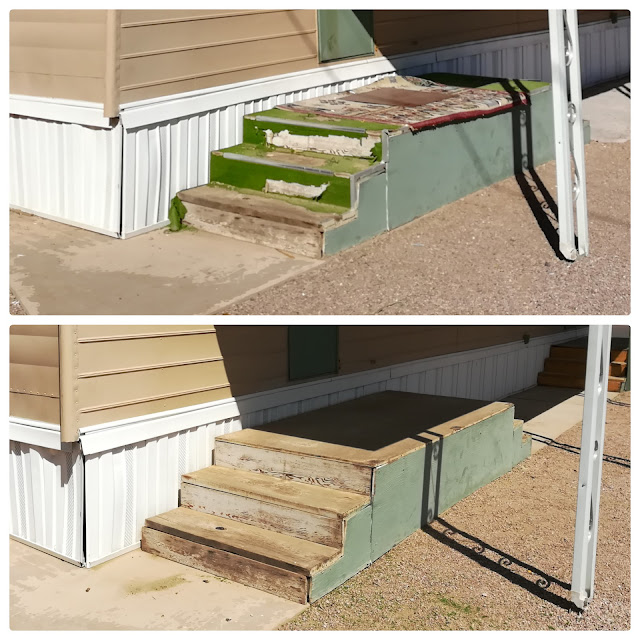 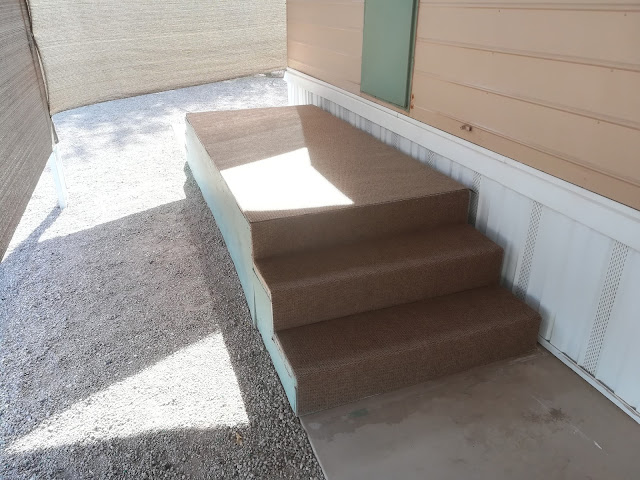 And my uncle helped me...

I bought my first drill (a 1/2" 20v DeWalt) and learned how to use that, which is how I hung that giant shade and fixed my stairs. Why did no one tell me that drilling is so much fun?? If I had no self-control, my entire house would be full of holes. I LOVE MY DRILL. 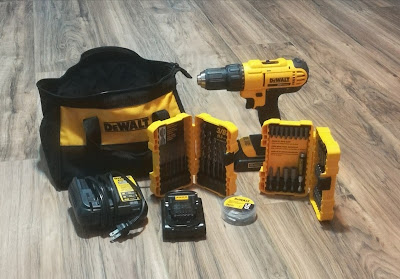 I still have a ton to do, and I'm trying to pace myself. This year I just want to get those windows working and basic insulation done. 2019 will be the heating and cooling system, 2020 will be the bathroom, 2021 will be the kitchen, etc.

In other neighborhood news, the drug house in this trailer park recently burst into flames. 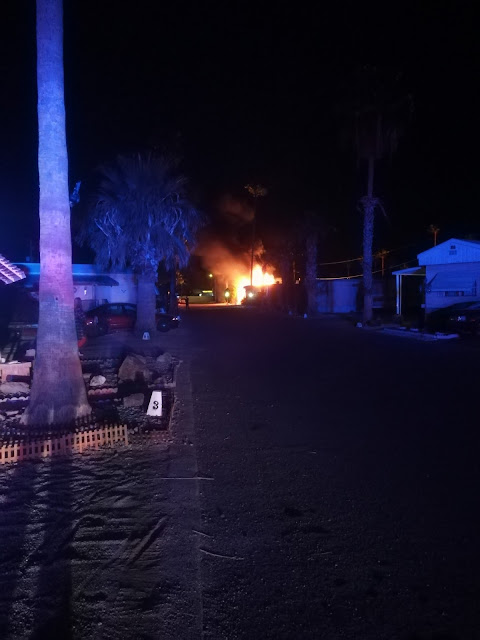 I came home from work that morning around 02:30, per usual, and all was quiet. I took my shower and around 04:30 was getting nestled into bed when red and blue lights were suddenly filling my windows, and police walkie talkies were buzzing all around. I ran outside to see what was happening, and lo, Lot 18 was completely engulfed.

Firefighters arrived shortly thereafter, unrolled their hose, snuffed out the fire, and left within half an hour, before the sun was even fully risen. 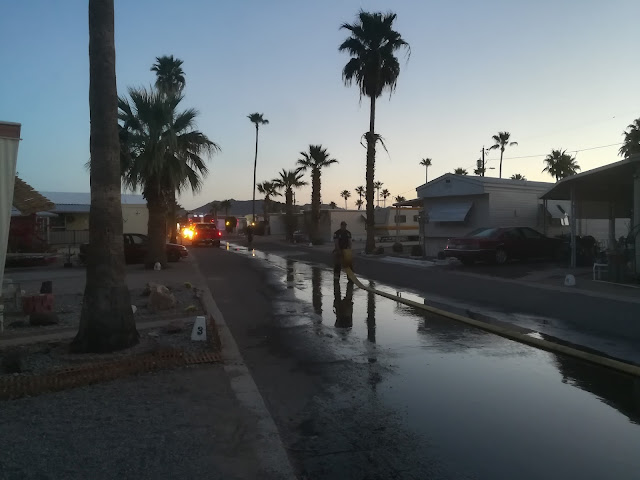 No one was hurt or killed, and fortunately none of the nearby trailers caught fire, and the whole neighborhood was relieved that the drug house was totally incinerated. Many residents had been calling for the drug dealer's eviction for a long time. “That's one problem gone,” my neighbor said.

Apparently junkies were still coming to the place all day, hanging out and fixing their bikes in front of the ruins, but they've all gone now and it's been marvelously quiet since. Traffic in and out of the park has greatly decreased since that clientele has disappeared.

I joined the park's Neighborhood Watch group in March, and was doing nightly patrols in my car upon coming home from work, but it got pretty hairy when the drug house was still intact. There's another meeting this week, and I'm curious to hear any news of when that mess will get cleaned up.

You know, I've never lived in a prissy neighborhood, but I've never lived in a true ghetto either. There are many luxurious trailer parks in Phoenix, but I'd classify this one as working poor. Some of the trailers are clean and modest, while some are held together with raw plywood and have yards and porches crowded with matted old couches and piles upon piles of trash.

I don't know where I fit in this picture.

I mean I don't fit in anywhere in the world, really. Heh. My family is such an odd mix of wealth and poverty. I have a BA and I like things like high fashion, formal dinners, and ballet, but I prefer manual labor over desk work and cannot stand snobbery of any sort. I'm not rich or poor or middle class, I'm too weird for the corporate world, not weird enough for the comedy world, too nerdy for the cool kids and too shallow for the nerds. I'm a misfit anywhere I go.

So I attend these Neighborhood Watch meetings on my days off, covered in dust after doing home improvements all day, with no makeup, a sparkly hair wrap, and I have no idea if I blend in with these people. I want to blend in—I don't want to show off my nicest clothes or make my house stand out as the "rich" one because I don't want to be targeted for robbery. I'm not rich; I'm just frugal and childless, so my small income goes a long way.

Many of my neighbors are quite poor. They've openly shared their past problems with addiction and incarceration. Several have the gaunt, bony, tattooed frames of former addicts. The lady who heads the Neighborhood Watch is missing all her teeth and often smells like booze. Many have very rough voices and emphysema from years of smoking. Others are permanently sunburned from years of hard labor with no sunscreen. Their finger- and toenails are long, chipped, and dirty, their worn pair of sandals are perfectly molded to their calloused and deeply cracked feet.

And here I come waltzing in, lily white. Uniformly translucent skin, white eyeballs, white teeth, smooth hands and feet, neatly clipped nails. I would never spend money on a manicure or pedicure, but I'm a grooming and moisturizing freak. Compared to my neighbors I look like a slug that's been taken out of its shell, all white and soft and squishy.

Although I'm learning new words from local parlance, and I think that helps me blend in. “Tweaker” is now a part of my everyday vocabulary both at work and in my neighborhood. (For my older readers, a tweaker is someone who uses stimulants like cocaine or meth.) I've heard the term in the following contexts, among others:
If any anthropologists are reading this, listen: If y'all need a mole for your ethnographic study on the working poor in the Southwestern US, I'm available. I've got the insider lingo and everything.

I don't think my trailer park neighbors are currently tweakers. They seem more like garden variety alcoholics and potheads. And they may be poor—they may have a lot of ripped mattresses in their yards, they may be weathered and wrinkled and missing half their teeth from lack of dental hygiene—but in their bloodshot eyes is a lot of caring. I've often been heartened by how much they care, how hard they try to keep things together, and how often their heart is in the right place. Sometimes they are so darling and sweet, I want to hug them. Other times, like when they let their dogs shit on neighboring lots and don't clean up the poop, or rev their beater cars when I'm sleeping, or trample all over my yard, or when they point a cigarette at their stringy-haired kids and yell, “Stop climbing on that shit you little fucker, before I come over there and kick your ass!” I think, Ugh, I am nothing like these people. I'm just living here because it's cheap.

Still, I'm more comfortable interacting with the working poor than I am with rich assholes in their beautiful houses, if I had to pick one group over another.

So let's recapitulate: The last time I lived in Arizona, I was a doctoral student on full scholarship at Arizona State and I lived in a huge apartment with a spiral staircase.

If that's not a fall from grace, I don't know what is.

I'm working a lot, I like my job, I'm saving money, I'm paying off debt, and I'm learning how to build useful stuff. That's a lot more than I accomplished in my PhD program.