The Desert Had Turned to Sea


Monsoon season is upon us, kids.

Here in southern AZ, monsoon season officially runs from June 15 to September 30, although the heaviest rains are usually Mid-July to mid-August.

Y'all, these storms are not to be trifled with. They are violent. The season started with a bang on July 9, and that storm snapped an entire block of telephone poles clean in half, which then crashed into people's homes. Awnings were ripped off all over town, streets were flooded and blocked by large debris, cops were directing traffic because stoplights were out and there were car accidents left and right, and thousands of people were without power for days. The scene was post-apocalyptic.

It's been storming every few days since.

I'm no stranger to electrical storms, but in Wisconsin and Florida, the lightning stays mostly in the clouds. Here, the lightning is more often cloud-to-ground and it strikes in thick, blinding bolts. One storm passed directly over my trailer park a few weeks ago, and the lightning was surrounding our park so closely that I could feel the individual shock waves rippling through my trailer walls and my body. It was like bombs going off for 45 minutes straight.

Not cool, man. I used to love storms, but that shit is totally unnecessary.

And the rain. Jesus Louisus. It pours so hard, I don't know of any English phrase that even comes close to describing it. Not "raining cats and dogs," not "sheets of rain," but more like a whole ocean being dumped out of a galactic bucket all at once. Such a high volume of water falls from the sky that it pushes the limits of physics and gravity, and it roars like an angry ocean when it hits the ground. It's nearly deafening. Deafening rain. And it lasts for HOURS.

The gale-force winds kick up dust storms as well. And no one here calls them "haboobs." That's a media clickbait term that no local Arizonian uses. It's just called a "dust storm." Driving in one is a lot like driving in fog, except if you have to go outside to, say, deliver pizza, squint your eyes and keep your mouth closed.


When I lived here before, I arrived around early August 2011 and left in late June 2012, so I missed the July peak of monsoon and never saw much action. I've also heard this year the storms are abnormally intense. But people have told me a lot of things over the course of my life that turned out to be false (e.g., that rivers run southward when actually they run, y'know, downhill), so we'll see.

To accommodate this seasonal rainfall, Phoenix has a system of man-made ditches they call "washes," and the wash that drains my trailer park borders my back yard before emptying into a large city sewer. Each heavy rainfall sweeps the litter out of everyone's yards and carries it down the wash in a raging river of junk. So after every storm, I have to go out in the mud with my boots, gloves, and bow rake and dig the wet garbage and tumbleweeds out of the sewer grate, or else the water gets backed up and floods my yard, which makes my steps wet, and too much moisture makes them stink like steaming cat pee because they've suffered from decades of being pissed on by the neighborhood feral cat colony.

It's a pleasure, I assure you.


The desert is a hot mess right now. A sopping wet, hot mess.

Around the time the monsoons began, my house started intermittently smelling like sewer gas, a lovely fragrance that begins with a top note of rotten eggs, followed by a heady middle note of natural gas, and ends with a base note of fresh baby diaper. I didn't see any sewage leaks in my house, and a Google search revealed that it was likely a blockage in my vent stack, aka "stink pipe," but luckily it could be fixed without hiring a professional if one was willing to climb onto their roof and clean it out.

Now, I'm generally not a fan of wobbly heights, especially ladders and roofs, but that smell was robbing me of my humanity. So I reluctantly bought my very first ladder. 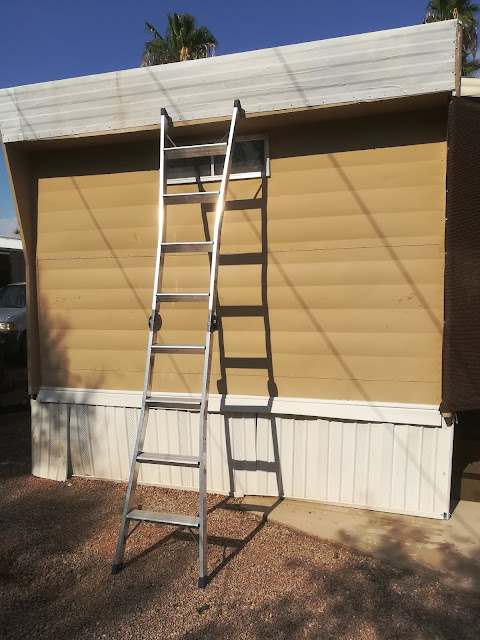 I gathered the recommended tools, including a push-pull stick I fashioned by taping a bent paper clip to the end of a cheap curtain rod.

I climbed halfway up the ladder, got nervous, then climbed back down and rested for a while.

Later I climbed a little higher and peeked over the edge to actually see my roof. That scared me, so I climbed back down and rested some more.

A little later, I climbed all the way to the top rung and laid my folded my arms on the roof. I set my chin on them and gazed upon the 120-degree expanse of eyeball-searing pure white roof. All the blood left my head and I felt dizzy. It's not too late to hide this ladder in the closet and just call a roofing person, I thought. No one has to know I tried this myself. It'll be my little secret.

Then I thought about the carpet contractors I called a few months ago who botched my order so bad that it was canceled and fully refunded, and then I thought about the highly recommended roofing contractors I called back in March about installing a foam roof and what fucking assholes they were showing up two hours late then insulting my neighborhood. No, I wasn't about to waste my time on another worthless contractor.

I had to get up on my roof myself.

After many rounds of Lamaze breathing, I managed to slowly army crawl up onto the roof. Despite my mind racing with thoughts of compound tibial fractures, I managed to stand up and tip-toe over to the stink pipe. I removed the crumbling mushroom vent cap, shined a flashlight down the pipe and didn't see anything, then stuck the curtain rod down there but ran into a curve at the very bottom, so then I just dumped a half bottle of lye down there and redrilled the cap back on with new fasteners. I felt better having my drill with me on the roof, because I love my drill and my drill is my friend. It knew I was afraid and it whispered comforting words to me. My DeWalt is my spirit animal.

All in all, I ended up going up and down that ladder six or seven times to fetch various tools, and after a while the ladder kind of grew on me. It's weirdly sturdy and didn't wobble at all. But I was also moving at a sloth's pace, so it may not have detected any actual movement.

Anyway, to my great pride and satisfaction, my house smelled fresh as a daisy after that.

Until my roof started leaking a few days later. Then my house smelled like musty old wood.

Back up on the roof we goes, hobbitses!


Apparently there were some hairline cracks where the old elastomeric roof coating was settling around the chimney pipe flashing, so I patched that crack with butyl tape yesterday afternoon, which will hopefully last until I can reseal the entire roof after the monsoons die down. I think a storm collar might be good, too. 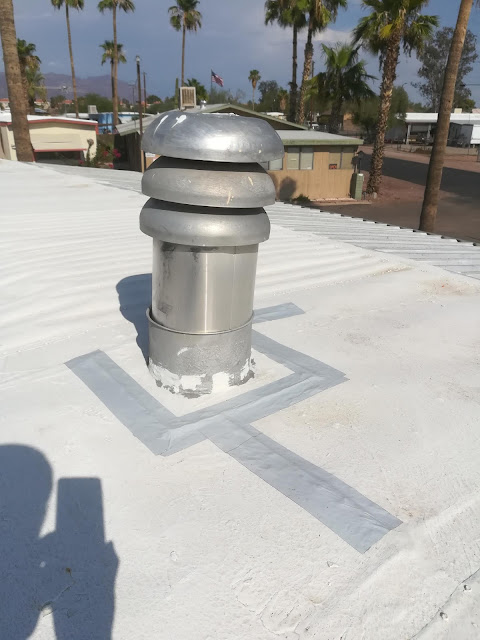 And whaddya know--a half hour after I came down from the roof, it started raining AGAIN.

In other home improvement news, trim is on the stairs: 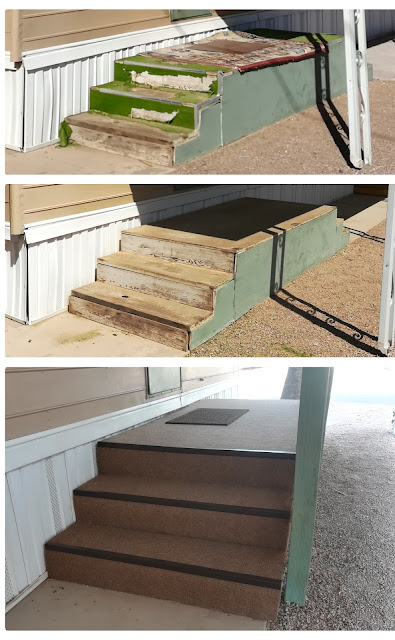 I used scrap metal, screws, Leak Seal, paintable caulk, primer, and custom paint to patch the gaping exterior hole where the rent drop box used to be (though in hindsight I should have just used Bondo): 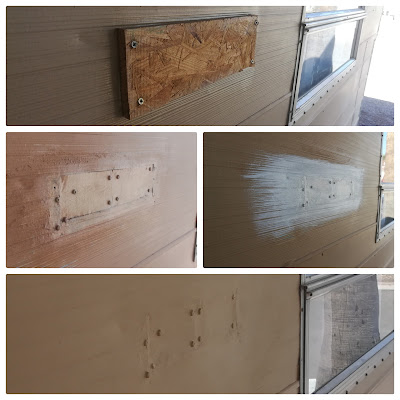 I chose brown for the stairs because I'll be painting (hopefully in December) that seafoam green trim  brown and my doors and front awning red. Happily, I found the exact paint I wanted on super clearance for 50% off. 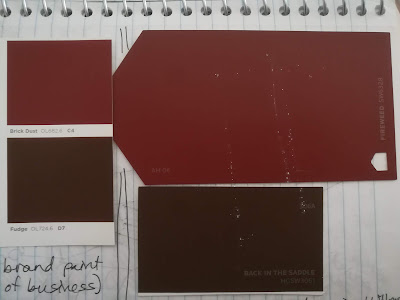 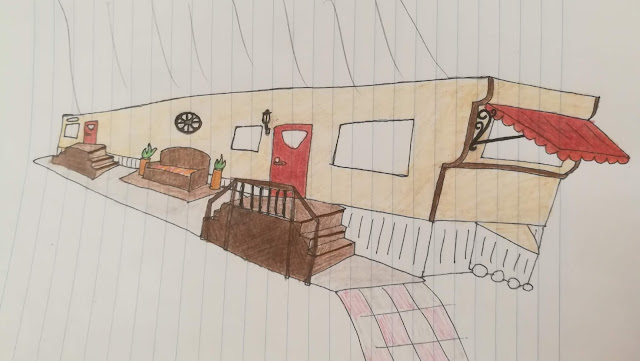 That bench will get a faux wood finish and be flanked by these two planters. They were black but I painted them copper and waterproofed these two foam aloes. 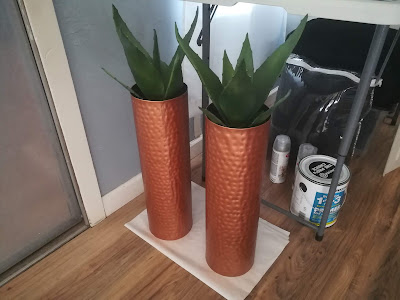 I planted a little star jasmine in early May, but despite careful feeding and watering, it's showing signs of heat stress and sun scorch, so I don't know if it'll make it through the summer. Poor jasmine!

Inside, I used my Rockwell oscillating tool to dig out the plastered-over RJ45 wire, then reattached it to a new outlet so I could have internet... 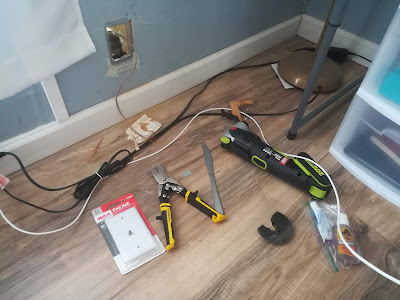 ...so that I could set up security cameras. Hey, I wired something myself and it actually works! 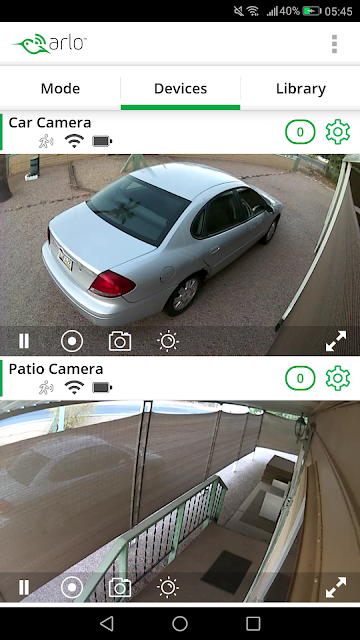 I also recovered and repaired a $5 Goodwill chair for my desk... 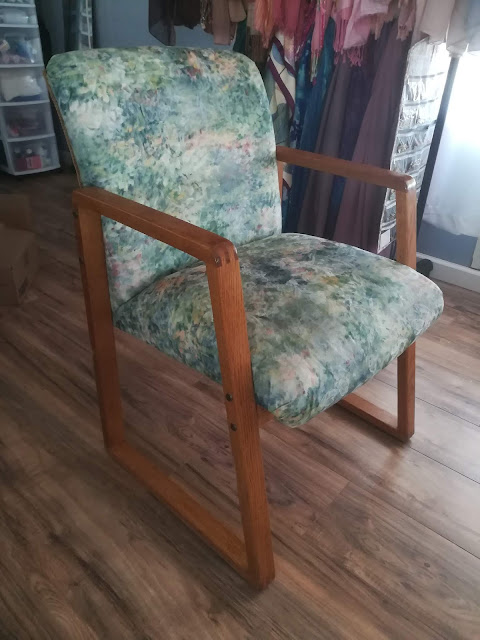 I'm also collecting parts for my bathroom remodel, as you can see by the state of my living/dining area: 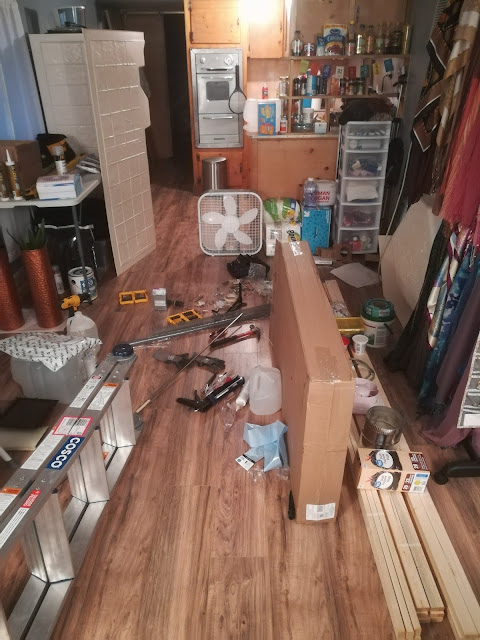 So there's a LOT to do, and I have house on the brain. Every moment of my spare time is consumed by planning, worrying, sanding, drilling, cutting, reading diagrams and building codes, watching hundreds of instructional videos, and ordering rare parts off the Internet. It's overwhelming sometimes, and there are days when I definitely feel like I'm in over my head and I have no idea how I'll get through all of these repairs, but overcoming my ladder/roof fear was a huge accomplishment for me. I'm not scared of my roof or of power tools anymore. I love walking around hardware stores and fantasizing about the variety of cool projects I could do with all those neat tools. I've always wanted to learn home improvement stuff, and I love having total creative control over my living space.

And lastly, after months of complaining to the park owners plus several frustrating trips to the DMV, I finally received the title to my trailer. I was previously told my house was a 1957 Buddy that had always been the park office, but in fact, it's a 1956 Henslee that, right before I bought it, was briefly inhabited by a woman and her daughter who were evicted for drug use.

By now I'm thinking my trailer is an urban legend--it's so old that no one really remembers where it came from or how it got there or when.

The legend lives on through the Chippewa on down...

I hereby christen this house The Edmund Fitzgerald.

And a captain always goes down with their ship.